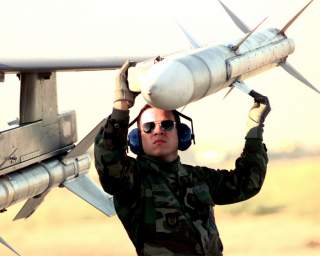 Even as the Defense Department starts fielding the new Raytheon AIM-120D version of the venerable AMRAAM, the United States doesn’t have any concrete plans for a follow-on next-generation missile. However, the U.S. Navy believes that it is possible to coax additional performance out of the AIM-120D with new software upgrades which might help the missile overcome enemy jamming and extend its range.

“Currently there is no program of record for a follow-on,” said Capt. Jim Stoneman, the Naval Air Systems Command program manager for air-to-air missiles during the Navy League Sea, Air and Space symposium in National Harbor, Maryland. But Stoneman said that there is fair bit that the Navy can do to upgrade the D-model AMRAAM with enhanced software.

The Pentagon is doing some technology development work towards a new missile, but Stoneman acknowledged the AMRAAM is nearing the end of its development cycle. The weapon still uses the same missile body and rocket motor—and relies on a mechanically-scanned active radar seeker that operates in the X-band. “They’re always doing technology development,” Stoneman told The National Interest after his briefing. “We’ve probably close to maxing it out.”

Nonetheless, the AIM-120D is currently operational and is bringing “game-changing” capability to the fleet, Stoneman said. The missile offers greatly enhanced performance compared to older versions of the AMRAAM because of a new datalink and a new GPS system, which allows the weapon to follow a more precise path. The range advantage—despite the lack of new missile body or rocket motor—is enormous.

The Navy is currently working on software upgrades to enhance the missile’s resistance to enemy jamming, Stoneman said. The service has also added a home-on-jam capability to help deal with some of the advance jamming capability that is being fielded by potential adversaries, Stoneman said.

Those potential foes include Russia and China, whose jammers pose a huge challenge for the AMRAAM. Stoneman said it would take more than one missile to counter the new Russian and Chinese jammers—instead it would take a system-of-systems approach.

Meanwhile, an industry source told me that the United States needs a new air-to-air missile to take full advantage of the range of the new Active Electronically Scanned Array radars found onboard aircraft like F-22, F-35 and F/A-18E/F Super Hornet. The radars can track targets far before they are in missile range—and moreover—American missiles are grossly outraged by new Chinese weapons like the PL-15. Even some of the newest U.S. industry developments don’t match the estimated range of the Chinese weapon. However, the source did note that American estimates of the last alleged Chinese super weapons, the PL-12, were grossly overblown.

Meanwhile, the new AIM-9X Block II—which is also is full production as of last summer—adds another capability to America’s arsenal. The new weapon is equipped with a datalink and is able to engage targets at beyond visual range—traditionally the Sidewinder is a visual range dogfighting missile. “We’ve about doubled the range that we have from the baseline missile,” Stoneman told The National Interest at the sidelines of the show. “The AMRAAM is still considerably medium range. It’s got significantly longer legs. So you’d employ them differently.

Moreover, the new Block II is able to engage target 360-degrees around an aircraft using a technique called lock-in after launch—which is a useful capability for a jet that can take advantage of the ability. The LOAL capability requires a helmet-mounted cuing system and has been integrated on some platforms, Stoneman said. Eventually, all American fighters will probably receive the new technology.

The Navy is working on a Block II+ version of the AIM-9X that is being tailored for the F-35. The new version does not add any new capabilities, Stoneman said. It’s simply designed to work with the new jet—which will carry the weapon externally. “The Block II+ is external carriage,” Stoneman said. There are no current plans for the AIM-9X to be carried internally onboard the F-35, Stoneman said. Nonetheless, work continues on improving the Block II AIM-9X incrementally.

However, work on the follow-on Block III AIM-9X has all but ceased.

Dave Majumdar is Defense Editor of the National Interest.

Image: An AIM-120 being loaded onto an F-16CJ. US Air Force Photo, public domain.