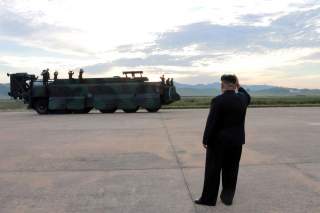 This October, the US government for the first time imposed economic sanctions on a Chinese company for providing vehicles for transfer North Korean road-mobile missiles.

The Treasury Department’s little noticed October 13 announcement of sanctions on the Wuhan Sanjiang Import and Export Co. Ltd., focused on the company’s sale of equipment to Iran, however. It only mentions the launcher transfers in passing – a symptom of Washington’s aversion to calling out Beijing on its covert support for the regime in North Korea.

Yet the ongoing failure of the administration to target China and its state-run companies for their role in Kim Jong-un’s rapid buildup is raising questions about whether Washington is serious about cutting off the lifeline of weapons supplies to North Korea from China.

The Treasury announcement of sanctions on Wuhan Sanjiang failed to mention the company is a subsidiary of the China Aerospace Science and Industry Corp., known as CASIC, a huge state-run mobile missile maker.

The sanctions announcement was not focused on China and appeared designed to play down the role that Chinese companies are playing in arming rogue regimes.

From at least as early as 2014, Wuhan Sanjiang sold missile-related gyrocompasses, specialty sensors and other electronics to Iran’s military and Islamic Revolutionary Guard Corps, the shock troops used to support terrorist groups around the world.

The Chinese equipment is likely incorporated in Iran’s Fajr and Zelzal short-range missiles that were transferred by Tehran to the Hezbollah terrorist group in Lebanon and have been fired against Israel on and off in recent years.

The Chinese company transferred the goods covertly and used deceptive means to “obfuscate those transactions to avoid detection,” the Treasury statement said.

“Additionally, in 2011, Wuhan Sanjiang transferred six off-road lumber transporter vehicles to North Korea, which North Korea subsequently converted into Transporter-Erector-Launchers (TELs) for use in its ballistic missile program,” it noted.

China also misled the UN panel of experts that monitors North Korea sanctions about the 2011 TELs transfers. According to the UN experts’ report, the Chinese asserted the launcher vehicles were sold as “lumber transporters” – a questionable claim since the transporters are considered too wide for most logging roads in North Korea.

After the transfers, the Wuhan Sanjiang trucks were converted into launchers for North Korea’s first road-mobile intercontinental ballistic missile, the KN-08.

In recent months, North Korea unveiled an even longer-range mobile missile that was shown being fired from the same Chinese-supplied vehicles. In July, North Korean state television showed the test launch of what the Pentagon calls the KN-20 ICBM as it was fired from one of the vehicles. Either that, or the North Korean government reverse engineered the vehicles and is now producing them indigenously.

The missile launchers are not the only Chinese products seen in the North Korean missile program.

“The trucks carried the ‘Sinotruk’ logo on the fuel tank and shared some identical features with the Sinotruk Howo 6×6 series trucks shown at the 10 October 2015 military parade,” the report said.

As with the KN-08 and KN-20 launchers, China sought to distance itself from the illicit transfers. Beijing insisted its trucks were intended for civilian use and did not violate the numerous UN sanctions on North Korea, a claim that analysts say is false.

The truck transfers are the most visible indications of Chinese involvement in the North Korean missile programs. Chinese and Russian electronic components have also been found inside North Korean test missile debris recovered from the Sea of Japan.

What is known is that when Libya gave up its nuclear program in 2003, US investigators discovered Chinese language documents, believed to have been supplied by China to Pakistan in the 1990s, revealing designs for a nuclear warhead small enough to fit atop a missile. The documents were believed to have come from the covert Pakistani nuclear supplier network headed by AQ Khan and were also likely transferred to North Korea and Iran.

The imposition of sanctions on one Chinese company linked to the North Korean mobile nuclear missile program is an important first step.

But the failure to directly sanction China for its illicit North Korean missile and nuclear trade will prevent the United States from applying effective pressure on Pyongyang.

The Trump administration, to effectively curb ongoing Chinese support, should also sanction Wuhan Sanjiang’s parent company, CASIC, along with Sinotruk and other firms likely involved in the missile and nuclear trade.

Rick Fisher, a senior fellow at the International Assessment and Strategy Center, said the sanctioning was a step in the right direction.

“But it also begs the question: When is the Trump administration going to directly sanction CASIC for providing its 16-wheel TELs to North Korea?” he said.

Fisher says the Trump administration should build on the October 13 sanctions by launching a global campaign of political pressure on China to cease and withdraw its assistance to North Korea’s missile and nuclear programs.

“This campaign should start with direct sanctions against the China Aerospace Science and Industry Corporation,” he said. “Follow-up sanctions should be considered against Chinese automotive giant Sinotruk, which in 2013 started a joint venture in North Korea that could allow Pyongyang to build new large TELs to replace its CASIC TELs.”

Bill Gertz is a journalist and author who has spent decades covering defense and national security affairs. He is the author of six national security books, including iWar: War and Peace in the Information Age (Threshold Editions).