Is America Getting Ready to Rejoin the TPP? 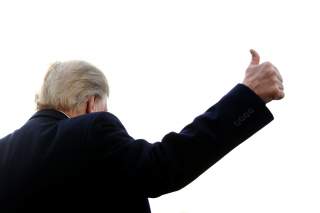 The United States has thrown a spanner into the works of the Comprehensive and Progressive Agreement for Trans-Pacific Partnership (CPTPP), the successor multilateral trade agreement to the once US-backed TPP. The liberalizing pact is expected to be formally signed this week without America.

In January 2017, US President Donald Trump derailed the original pact when he withdrew America on his first day in office. On an “America First” campaign trail, Trump referred to the free trade deal – initiated by then President Barack Obama as the economic plank of his ‘pivot’ to Asia policy – as the “rape of our country.”

After one year in office, however, Trump has said he might be interested in rejoining the revised pact after all.

Speaking on the sidelines of the World Economic Forum in January, Trump was clear on what could tempt him to reconsider joining the pact. “I would do TPP if we were able to make a substantially better deal. The deal was terrible; the way it was structured was terrible,” he said, without elaborating.

In late February, Treasury Secretary Steven Mnuchin announced during an investment summit organized by the US Chamber of Commerce: “I’ve met with several of my counter-parties and other people, and we’ve begun to have very high-level conversations about TPP.” He said renegotiating the trade agreement was again “on the table.”

America’s renewed interest in the pact comes as Trump moves to impose new tariffs on steel and aluminum imports, a lurch towards protectionism many analysts view as a first ‘trade war’ salvo towards China, although Chinese products represent a mere 2% of US’s total steel imports.

China has nonetheless threatened retaliation, as has Canada and the European Union.

Those bubbling tensions may also explain Trump’s renewed interest in the CPTPP as the deal was “always an attempt to exclude China” from preferential regional trade, says Sophal Ear, associate professor of diplomacy and world affairs at Occidental College at Los Angeles.

It’s not immediately clear how Trump’s flip-flop on the pact would hurt him politically after rising to power on a nationalistic platform that questioned the benefits of free trade on the American working class. His presidential candidate rival, Hillary Clinton of the Democrat Party, also opposed TPP.

“The inclusion of the largest economy in the world in the trade pact will greatly boost the its clout, and [boost] trade and investment gains that the other smaller members are looking for,” says Yeah Kim Leng, professor of economics at Malaysia’s Sunway University Business School.

America’s participation meant the TPP-12, as the original pact is now known, would have accounted for almost 40% of the world’s gross domestic product (GDP) and about 30% of all global trade. Without the US, the CPTPP now only accounts for 14% of global GDP and a little over 16% of global trade.

Expectations were that the original TPP-12 would have boosted Vietnam and Malaysia’s GDPs by around 8%. Without American participation, the revised pact will only augment them by 2.2% and 3.1% respectively, media reports said.

In January, the 11 remaining nations agreed in principle to the CPTPP and its final version, which is largely the same as the TPP-12 but with the removal or “suspension” of a few dozen provisions, mostly on intellectual property (IP) protections that included patent regulations on pharmaceutical products that particularly irked some Southeast Asian nations.

However, the revised CPTPP retains strict requirements for labor rights and environmental protection, as well as tougher government procurement procedures for state-owned enterprises (SOEs) that aim to create a more level playing field for private firms which will particularly affect Malaysia and Vietnam.

The pact is expected to be officially signed on March 8 and it’s highly unlikely that America’s renewed interest in the deal will delay the ceremony. But Trump has made clear that he would only rejoin if further significant changes are made that benefit America.

Some analysts think the CPTPP’s suspension of certain provisions found in the TPP-12, chiefly about intellectual property which Washington lobbied hard to include in the original document, would possibly be reinstated if America decides to rejoin.

Whether these would be enough for Trump is yet to be seen. Chilean President Michelle Bachelet told the Nikkei Asian Review in late February that the CPTPP’s members would welcome the US’ return but Washington would have to accept the revised agreement’s terms.

It is “probably not acceptable to try to start all over again from zero,” Bachelet said, given that the CPTPP’s 11 members had worked for almost a year on the revised agreement. But restarting those negotiations isn’t completely out of the question considering the heft of America’s markets.

“The attraction of TPP was Japan and the US as anchors to the deal. Without the US, or with the US under Trump, there’s really no telling what the deal would mean,” says Sophal Ear, associate professor of diplomacy and world affairs at Occidental College at Los Angeles. “If you’ve seen Trump in meetings, it’s not clear what he wants or even knows what he wants.”

But what is becoming clear is that America’s renewed interest in the pact is not simply down to economics.

Mohd Nazari Ismail, a professor of business and economy at the University of Malaya, says it’s “quite obvious” that Trump is now rethinking the CPTPP because he “realizes that [America’s] absence from the TPP will mean China will be more influential in the future.”

Vietnam shows how strategic assurances alone aren’t enough to counterbalance China’s growing hegemony in the region. Hanoi has enjoyed close ties to Trump’s White House, with military co-operation between the two nations as strong as it has been for years.

At the same time, analysts say that unless strategic relations also have an economic cornerstone, Southeast Asian nations will quickly fall into China’s orbit, especially given the exorbitant funds Beijing is offering up under the US$1 trillion One Belt, One Road initiative.

“As Vietnamese, we are always trying to find a way to balance China’s power…For us, TPP isn’t just an economic issue. It’s also about geopolitics and social issues,” Nguyen Ngoc Anh, a professor at the Foreign Trade University in Hanoi, said in a media report last year.

After Trump withdrew America from the TPP-12 early last year, the baton was taken up by Japan, which has always been the agreement’s biggest advocate after the US, in large part to counterbalance China’s rising economic influence in the region.

“Japan’s lurking fear is that pan-Asianism excluding the United States could push America to be further inward-looking,” Yoichi Funabashi, chairman of Asia Pacific Initiative, a Tokyo-based think tank, wrote in media last month. Deeper US engagement in Asia is indispensable to balance China. TPP desperately needs the US market to have strategic significance.”

Another possible Trump realization is that in the coming years the current CPTPP’s signatories might not be as desperate for American participation as they seem to be now.

In recent months, there has been renewed speculation that the CPTPP could soon be joined by the likes of Thailand, Indonesia and the Philippines, as well as Taiwan and South Korea.

Peterson Institute for International Economics, a US-based think tank, contends that if these five nations join the CPTPP, creating a possible CPTPP-16, it would boost their collective economic gain from trade and rising incomes by US$486 billion by 2030 – more than expected gains of the TPP-12.