Is America Getting Ready to Ship Its 'Big Guns' to the South China Sea? 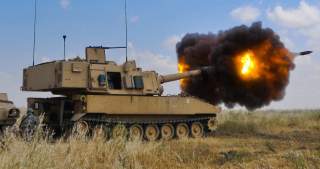 While Pentagon officials did not wish to specifically comment on this report, saying they do not discuss intelligence matters, officials are clear that the US military "watches the area closely," Cmdr. Gary Ross, Pentagon spokesman, told Scout Warrior.

While few are likely to view this particular development as extremely provocative. The presence of these weapons are, most likely, not a surprise to the Pentagon. However, the Pentagon has been very vocal in its criticism of China for "militarizing" the region, in some cased placing mobile artillery in disputed areas.

It is not clear how long the weapons have been there, multiple reports say. However the Chinese paper did specify that the rockets were in place to defend against Vietnamese divers from encroaching upon their territorial waters. The anti-frogman rockets could well have been in place since 2014, according to the state-run report, which cited a need to prevent Vietnamese divers from installing fishing nets in the area.

The rockets were placed in the Fiery Cross Reef, a hotly contested area of the Spratly Islands; it is a Reef administered by China but also claimed by the Philippines, Vietnam and Taiwan, according to a report from Reuters.

Continued tensions in the region come as senior Army and Pentagon strategists and planners consider ways to fire existing weapons platforms in new ways around the globe – including the possible placement of mobile artillery units in areas of the South China Sea to, if necessary, function as air-defense weapons to knock incoming rockets and cruise missiles out of the sky.

Having mobile counter-air weapons such as the M109 Paladin, able to fire 155m precision rounds on-the-move, could prove to be an effective air-defense deterrent against Chinese weapons in the region.

The U.S. has a nuanced or complicated relationship with China involving both rivalry and cooperation; the recent Chinese move to put surface-to-air missiles on claimed territory in the South China Sea has escalated tensions and led Pentagon planners to consider various options.

At the same time, Pentagon officials have publically stated the U.S. will continue “freedom of navigation” exercises wherein Navy ships sail within 12 miles of territory claimed by the Chinese - and tensions are clearly on the rise.  In addition to these activities, it is entirely possible the U.S. could also find ways to deploy more offensive and defensive weapons to the region.

The potential use of existing weapons in new ways is entirely consistent with an existing Pentagon office which was announced publically last year.  It is called the Strategic Capabilities Office, or SCO, stood up to look at integrating innovating technologies with existing weapons platforms – or simply adapting or modifying existing weapons for a wider range of applications.

“I created the SCO in 2012 when I was deputy secretary of defense to help us to re-imagine existing DOD and intelligence community and commercial systems by giving them new roles and game-changing capabilities to confound potential enemies -- the emphasis here was on rapidity of fielding, not 10 and 15-year programs.  Getting stuff in the field quickly,” former Defense Secretary Ashton Carter said last year.

In fact, the Pentagon is vigorously stepping up its support to allies in the Pacific theater. A 2016 defense law, called the Southeast Asia Maritme Security Initiative, provides new funding to authorize a Department of Defense effort to train, equip, and provide other support to the Philippines, Vietnam, Indonesia, Malaysia, and Thailand, Pentagon officials explained.

Army Rebalance to the Pacific

Also, in recent years Army documents have emphasized the need for the service to increase fire power in the Pacific to increased fielding of THAAD, Patriot and the Army Tactical Missile System, or ATACMS in the Pacific region. ATACMS is a technology which delivers precision fires against stationary or slow-moving targets at ranges up to 300 km., Army officials have said. In 2013, the Army did deploy THAAD missile systems to Guam. More recently, THAAD has been deployed to South Korea in light of growing tensions on the Korean peninsula.