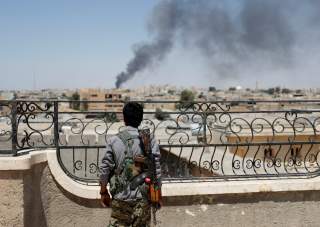 Beginning as a national protest in 2011, the Syrian conflict has evolved into a complex regional and international conflict. Local protests spread into an armed rebellion, then becoming a national civil war and, finally, a proxy war reminiscent of the Cold War. In the mold of all such conflicts, regional and global powers were involved in the crisis from the civil war’s beginning. Syria’s President Bashar al-Assad sought support –– from Russia, Iran, and Lebanon –– to put down rebel forces. As the Islamic State (IS) violently took over a third of Syria and Iraq, America got involved by enlisting a coalition to defend Iraq from IS and push them back into Syria’s eastern territory.

Beyond this simple plan for containment, no clear strategy was established for America’s involvement, what a successful intervention would look like, or an open public discussion of dealing with Russian military involvement. Initially, it was hoped that reclaiming lost Iraqi ground would be the end of U.S. involvement.

President Obama argued IS would only be defeated by engaging them within Syria, placing American forces and weaponry in opposition to Russian, Iranian, and Lebanese forces. Until recently, the armed conflict has been complex and bloody, but outright war between opposing forces has been avoided. However, over the past week, there were worrisome instances of U.S. allied forces being threatened by the Syrian regime and its allies. Once the U.S. fired back, the Russian response significantly raised the specter of a much larger conflict, perhaps even global.

The stage was set for an event that has been avoided for over sixty years; Russian and American jets flying sorties and bombing, in the same airspace, on opposing sides of a conflict.

However, the Syrian mess is not merely a modern spin on an old Cold War habit. It is a dramatic escalation of tension between two powerful adversaries with a long history of mistrust and mutual suspicion. During the Cold War, American and Soviet forces rarely, if ever, directly fought in a conflict. Korea and Vietnam saw American forces fight on the ground, but the Soviets acted through proxies, a controversion of the 1980s war in Afghanistan.

This dance of war reflected a mutual, genuine fear, a fear of two nuclear-armed powers fighting each other directly. Institutions –– like the infamous hotline in the White House to the Kremlin –– were created to further improve communication between Moscow and Washington, D.C in perilous times.

These institutions, and the willingness to use them before disaster struck helped stop the cold, conventional conflict from escalating into the hot, potentially nuclear war it could become.

Aware of the dangers of this sort of escalation, President Obama and Secretary of State John Kerry negotiated a working compact with Russia in 2015 to avoid conflict between the two forces. More agreements followed over the next year to deepen cooperation between the two countries’ in the fight against IS –– and not against each other. Included was a promising “deconfliction” communication line between the American and Russian militaries, primarily in the deconfliction of airspace, in hopes of preventing accidental encounters that could lead to escalation.

But, after the myriad attacks from both American and Syrian allied forces in the past week, Russia seems intent on raising tensions.

The Russian defense ministry stated they would now be treating coalition forces as potential enemy “targets.” To make matters worse, Russia suspended the use of the deconfliction hotline. As the two powers continue to cross each other and communications are cut further, the threat of global escalation increases.

This time, it was a Syrian jet. What happens when it is a Russian pilot killed by an American missile? When Russian President Vladimir Putin sees (or orchestrates) protests in the Red Square of Moscow, with hundreds or thousands of Russians demanding retribution? The beginning of World War Three--or its prevention--hinges on the response of Putin, a persistant adversary  of America, and a reputation predicated on strength against Western aggression.

Under Obama, a tit-for-tat between Russia and America was not inconceivable, President Trump, however, has often argued for better relations with Russia, and is even under investigation for questionable relations with their government. Shouldn’t Trump’s alleged collusion with Russia diminish tensions?

Sadly not. Trump is just ascapable of dragging the nation further down into the interventionist rabbit hole.  He began with an airstrike –– delivered barely  two weeks after his inauguration ––  against the Syrian government for their use of sarin gas, immediately inflaming tensions. Furthermore, even if Trump himself  is less willing to engage overseas, as he delegates more authority to his generals, he may not even be in the room when and where calls to use force are made.

Unless policymakers and the American public demand an exit strategy from the government, the status quo will persist. The status quo of an aimless American military, shooting and bombing Syrian, Russian, and Iranian forces with no definitive goal cannot last. The U.S. has no clear timetable for departure and has never even possessed a practical idea of what a “successful” intervention in Syria would resemble.

In this climate –– a West uncertain of its mission and a resolute Russia satisfied with the perilous status quo –– the Syrian crisis threatens to drag the world blundering into the next world war.

Tim Joslyn is a senior at George Mason University in Virginia where he studies Public Administration and Economics. He’s currently an Intern with Young Voices.

Image: A Kurdish fighter from the People's Protection Units (YPG) looks at a smoke after an coalition airstrike in Raqqa, Syria June 16, 2017. REUTERS/Goran Tomasevic/File Photo​