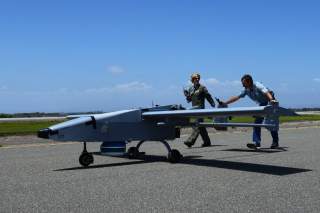 The U.S. military is holding a two-week anti drone drill, according to numerous media reports.

From July 26 through August 7, the U.S. military is holding its annual Black Dart drill, which it calls its “ largest live-fly, live-fire joint counter-UAS technology demonstration.” The drills, which are being run by the Joint Integrated Air and Missile Defense Organization, or JIAMDO, are being held at the Naval Base Ventura County in California.

Navy Cmdr. David Zook, chief of the Capabilities Assessment Division at JIAMDO, said that Black Dart 2015 provides “a unique and very valuable window for us to come together for two weeks here and practice in a littoral environment, a land-based environment and a deep-sea environment in many different scenarios.”

This is the 14th edition of Black Dart, which is held annually, but only the second time part of the exercise is open to media. Previously, the U.S. military tried to keep the exercises largely secret in order to deny adversaries the knowledge of how the U.S. military planned to counter drones.

Air Force Major General Scott Gregg told the New York Post that the decision to open up the drills was “just to let everybody know that the Department of Defense is aware of this problem [with drones], we’re concerned about it and that we’re working on it.”

In the wake of a number of incidents involving small drones, including a drunk hobbyist crashing a quadcopter on the White House’s South Lawn earlier this year, this year’s Black Dart will focus on what the military calls Group 1 drones. Group 1 drones weigh under 20 pounds and fly below 1,200 feet.

“Even though we’ve been looking at [the small drone threat], it’s taken on a new sense of urgency,” Gregg told NYP.

Similarly, Zook at JIAMDO said "Small manned and unmanned aircraft have always been hard to find…. It's hard to tell the difference in the radar cross section from that and other small airborne vehicles or even birds.”

Black Dart will feature representatives from all four branches of the U.S. military, as well as partner nations serving as observers and members of the industry. In fact, industry members will provide many of the anti-drone systems that Black Dart will test, while JIAMDO will provide the drones these systems will be tested against.

All in all, some 55 different counter-drone systems will be tested at Black Dart last week and this week.

The greater attention Black Dart is receiving in recent years is emblematic of the growing problem that the U.S. military faces from the proliferation of drones. While the United States has had a near-monopoly on drones over the last decade-plus, this is no longer the case.

More than 70 nations now operate unmanned vehicles in some capacity, and some non-state actors like Hamas and Hezbollah also operate drones.

The United States has adopted numerous systems to counter the threat posed by these drones. For example, it has equipped the USS Ponce in the Middle East with laser guns to deal with swarms of Iranian drones.

Another enticing new weapon is the one created by SRC, a non-profit formerly affiliated with Syracuse University. SRC wrote new software to tie together the Humvee-mounted AN/TPQ-50 counter-fire radar and the CREW Duke counter-IED system, along with a small armed-drone called Switchblade.

Together, the SRC system can jam, take control of or destroy kinetically any small drone. Gregg says that it stands “one of our greatest success stories from Black Dart.”