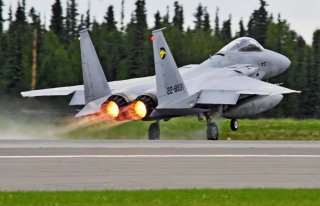 As North Korea ramps up its efforts to develop a hydrogen bomb capable of striking the continental United States, the U.S. and its allies are doubling down on efforts to remind Pyongyang that a war on the Korean Peninsula is one it will lose.

On Aug. 30, a day after North Korea launched a ballistic missile over northern Japan, the U.S. military joined South Korea and Japan in a spectacular show of force against the Hermit Kingdom.

And for good reason: North Korean leader Kim Jong Un warned that the missile launch was “the first step of the military operation of the [Korean People’s Army] in the Pacific and a meaningful prelude to containing Guam.”

Guam, a major U.S. military hub in the Pacific, is home to roughly 160,000 American citizens, and was recently added to the list of places North Korea is threatening to bomb.

The 10-hour show of force mission, which was overseen by U.S. Pacific Command, involved two U.S. Air Force B-1B bombers out of Guam, four U.S. Marine F-35Bs, two F-15Js, and four South Korean F-15Ks. After flying in formation across the peninsula, the aircraft pummeled a mountain on the Pilsung Range with live bombs. The exercise was filmed and released the following day by the Pentagon for public consumption.

“North Korea’s actions are a threat to our allies, partners and homeland, and their destabilizing actions will be met accordingly,” Gen. Terrence J. O’Shaughnessy, the commander of U.S. Pacific Air Forces, told The Washington Post in a statement.

On Sunday, North Korea raised the stakes even higher when it detonated its sixth and most powerful nuclear bomb.

President Donald Trump initially responded to the nuclear test via Twitter, criticizing South Korea for its “talk of appeasement” with the North, and stating that the United States might “stop all trade with any country doing business with North Korea.” China is one of those countries.

Later that day, Defense Secretary James Mattis emerged from a meeting with the president to warn that “any threat to the United States or its territory, including Guam or our allies, will be met with a military response.”

Eventually, however, Mattis appeared to tone down his remarks, adding, “We are not looking to the total annihilation of a country, namely North Korea. But as I said, we have many options to do so.”