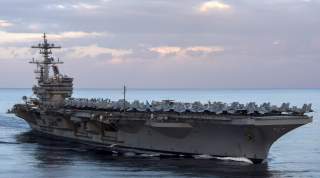 Sending the aircraft carrier USS Carl Vinson and its escorts into the South China Sea is an apparent shift from the Obama administration’s policies of “de-escalation” and accommodation towards the People’s Republic of China.

Obama prohibited such Freedom of Navigation Operations — known in military acronym as FONOPS — in the South China Sea from 2012-2015, before allowing some patrols in 2016.

However, nobody quite knew if these challenged Chinese claims or implicitly recognized them, leading one observer to note they were exercising the “right of incoherent passage.”

What’s the significance of the recent cruise into those water by the nuclear-powered USS Vinson supercarrier?

In itself, the Vinson patrol doesn’t mean much — unless it is part of a broader, long-term strategy. Thus, the important thing to watch is how the Trump administration’s China policy plays out in the coming months.  Specifically, will it demonstrate a protracted commitment to defending the core interests of the US in the region?

US officials and military officers have declared that the US can and will go anywhere and anytime it wants in the South China Sea. The New York police department had the same policy toward Times Square when it was the fiefdom of criminals and illegal activities, before Mayor Rudolph Giuliani cleaned it up in the mid-1990s.

The police would send a squad car through Times Square anytime they wanted and the criminal flotsam would part as it went through, only to flow back in and carry on illegal antics once the police cruiser was gone.

The US Navy operating in the South China Sea has about the same effect; they pass through and afterwards China just keeps on fortifying and militarizing the reefs and islands it has occupied, even though the Permanent Court of Arbitration in The Hague ruled such behavior illegal.

And it appears China’s naval vessels are shadowing (escorting, depending on one’s perspective) US Navy ships through the area – and have been for a couple years. The US Chief of Naval Operations indicated a few months back, however, that he didn’t’ seem to mind since the Chinese Navy was behaving professionally.

That’s comparable to the NYPD Chief appreciating that the illegals running Times Square back in the day were kind enough not to interfere with the police version of FONOPS.

The US Navy might be able to sail through without Chinese ships stopping it, but that doesn’t change the reality that China now dominates the place. And even if it allows American vessels and aircraft — both military and civilian — to pass through, China won’t necessarily let others do the same. That threat in itself is a useful restraint on how different nations behave in dealing with China on other matters.

The USS Vinson cruise and future patrols are useful but alone are not enough. None of this is going to roll back – or even overly intimidate China. It’s too late for that.

However, US operations in the South China Sea do insert risk and uncertainty into China’s thinking over its continued unrestrained militarization and moves to dominate the region — by raising the possibility the Americans might finally bite back.

The Trump Administration needs to move along a number of different lines and beyond the military option to have any real effect. To gauge prospects for success, watch what the new administration does in the following areas:

US Navy. In addition to operating regularly in the South China Sea, undertake long-term naval modernization efforts – to include building more (and more useful) ships and ship-to-ship missiles that go farther. Train the US defense industry to build ships and hardware for less than a price that would bankrupt Croesus.

Japan. Deepen links with Japan, focusing on an upgraded and properly funded Japan Self Defence Force able to operate with US forces — along the lines of what the US and Japanese navies already do – and conduct regular joint patrols and exercises in the East China Sea. Watch Japan’s defense budget, JSDF efforts to become a joint force, and what JSDF and US forces do together — and where they do it.

Taiwan. Revisit, indeed reread the Taiwan Relations Act and live up to its terms. End the dangerous standoffishness in US policy towards Taiwan that adds to its isolation and demoralization caused in large part by doubts over US (and the free-world’s) commitment to its democratic experiment.

ASEAN. Take a more systematic, concerted approach to ASEAN, recognizing that consensus is impossible and reticence is normal. Many ASEAN states and other Asian nations are watching to see how serious and reliable the new Administration is before deciding how close to get to the United States.

Australia and India. Work on these relationships, particularly the defense parts. These are both strategic partners and interested in the same things as America in Asia. Don’t take Australia for granted, and never forget what the Australians have done for the United States in remote parts of the world over many decades. Accepting a few surplus immigrants is a small price to pay.

Economic measures. If the Trump administration slaps tariffs on Chinese products, don’t be impressed. Beijing will respond tit-for-tat on American products, and can absorb any amount of such pressure. Instead, apply pressure elsewhere by requiring reciprocity for Chinese investments in the United States; enforcing WTO rules and eliminating exemptions; imposing harsh punishments for intellectual property violations past, present, and future; going after sanctions violations by PRC companies – as in the recent ZTE case; and simply taking 30 days to inspect Chinese ships coming into US ports owing to product health and safety concerns.

Trade. TPP is gone, so replace it with something useful, even if only bilateral agreements. These tend to attract others. It also shows both US interest and leadership in the region. Such things matter.

Strategic Communications. US strategic communications is mostly nonexistent. Coherently, loudly, and regularly speak up on behalf of US and its partners’ interests, and challenge China’s assertions of its entitlement to dominate the South China Sea and the rest of Asia.

CCP Corruption. Help the Chinese Communist Party eliminate corruption by identifying, publicizing and keeping in safekeeping its members’ and their relatives’ real estate, and financial assets in the United States.

So the USS Vinson sailing into the South China Sea made the headlines for a few days, though we still don’t know what difference or not it will make.

Hopefully, it presages a more serious and comprehensive US approach to the region.

Watch what Washington does over the next twelve months to determine whether we’ve just seen the naval equivalent of a really big NYPD patrol car drive through the old Times Square or something more meaningful.