America Must Come to Terms with Reality in Syria 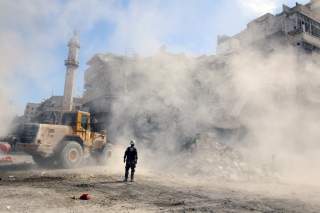 The joint attack carried out by the United States, United Kingdom and France on April 14 in Syria—targeting three sites related to Assad’s chemical weapons program—was a firm reaction and punishment for Assad’s continued use of chemical weapons against Syrian civilians. What singled out this chemical weapons attack from others Assad carried out over the past year was that it was not limited to the use of chlorine. The large number of civilian casualties and the fact that sarin nerve agent was mixed with the chlorine sparked the second military response by the Trump administration—this time together with the United Kingdom and France—with the aim of upholding the well-established international norm against the use of chemical weapons. But the new reality in Syria—whereby Russia and Iran are playing leading roles—has made it more difficult for the United States to take action when it believes it must.

Russia’s entry into the Syrian Civil War began in September 2015. The joint Russian-Iranian military campaign to prop up the Assad regime was enabled by the conclusion of the Joint Comprehensive Plan of Action (JCPOA): everyone was happy to check the box on Iran, and the Obama administration, fearful of any step that might jeopardize the deal, turned a blind eye to the implications of this new and dangerous development. Having sold the Iran nuclear deal as something that could lead to moderation in Iran, the stepped-up regional aggression in Syria did not fit President Obama’s paradigm. And there was certainly no appetite to confront Russia. Russia’s current role in Syria—which is a major constraint to U.S. military action—is the direct result of Obama's failed policy of inaction.

Despite the danger of escalation, the Trump administration did act militarily. While the most recent strikes will by no means end the butchery in Syria, significant features of the attack should not be overlooked. First, this was a joint response—three allies working together, not "isolated America." Pundits that have been gleefully denouncing the United States for being isolated on every foreign policy decision conveniently ignored any mention of the significance of this show of unity. The strike was not only an important joint show of determination, but it highlights that other states will talk the talk on the value of international norms, but lack the moral clarity to act when the norm is violated—repeatedly.

Second, the response demonstrated that while the United States took steps to avoid escalation with Russia, it was not deterred by Moscow’s threats. Some commentators were quick to proclaim that the alliance between Russia, Iran and Assad has been cemented following the attack, but while Iran and Assad have a clear interest in making this claim, it has no empirical basis. In fact, Russia is more likely trying to restrain both Assad and Iran behind the scenes for doing things that elicit responses—from Israel surrounding the drone incident, and American-British-French action following the latest chemical attack—that could jeopardize Putin's gains in Syria.

Has Israel been left on its own to confront Iran in Syria? Israel has been working alone for quite some time to ensure its security interests, but now at least enjoys rhetorical backing from the White House—that was notably absent during the Obama years. As for Russia, it will most likely continue its policy of working with all sides in order to secure its own interests in Syria, making it likely that Moscow will continue to coordinate with Israel. Russia does appear upset that Israel did not inform it of the attack on the T-4 airbase—since Russian military personnel could have been at risk.

Nevertheless, Trump’s repeated statements about leaving Syria are a major source of concern. The United States should remain engaged in Syria in order to resist Iran's entrenchment there. The president addressed Iran’s regional aggression when he unveiled his Iran policy last October. Policy toward Russia is a delicate balancing act: it should include not only sharp messages regarding Moscow’s role in Syria, but also attempts to reach understandings with Russia for ending the civil war—which includes ending Iran’s entrenchment there. When the fighting is over, Moscow’s interests will no longer align with Tehran’s and both will be vying for influence in a zero-sum manner.

Looking to the future, one must account for the cost of inaction. Not taking action could enable a crisis to grow to uncontrollable proportions. While there are currently risks of escalation with Russia absent in 2013, ignoring Iran’s growing entrenchment in Syria could have infinitely more negative ramifications over time. President Trump stopped kicking the can down the road on North Korea, addressing the problem now before it gets worse.

This lesson should also apply to Iran's nuclear ambitions. In 2015, Obama sold the Iran deal by saying that the United States has military options if things go badly. Now, that is simply not true—while U.S. military capabilities remain, geopolitical realities change, and for that reason, options do not remain constant. Once Russia entered the Syrian Civil War, the situation changed dramatically and America did not have as much leeway to act militarily. Trump must demand that the JCPOA be strengthened now, and impose new sanctions in response to Tehran’s aggressive behavior in the region. This issue cannot be left till "later” because when later comes, it will be too late.