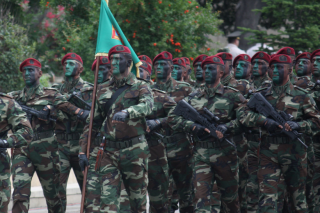 Russian President Vladimir Putin is due to meet his Azerbaijani counterpart, Ilham Aliyev, on June 13 in Baku. On the agenda: resolving the quarter-century-old dispute over the breakaway Nagorno Karabakh, a majority-Armenian territory which split from Azerbaijan in a brutal war with Armenia during the early 1990s. A ceasefire concluded the active phase of the conflict in 1994, but the feud remains unresolved, and violent incidents persist along the line of contact.

There is little reason to believe the meeting will yield any progress. An official peace process, the OSCE Minsk Group, has been underway since 1992 with joint Russian-French-American leadership. The Minsk Group is plagued by Western inattention and Kremlin intrigue. Russia deliberately plays both sides in Nagorno Karabakh and Washington and its allies seem not to care. Putin’s meeting comes only three days after American Minsk Group representative James Warlick discussed the conflict with Armenian President Serzh Sarkisian. That Russia provides presidential-level attention to Nagorno Karabakh while the United States offers only its liaison to a paralyzed negotiation forum is illustrative of U.S. indifference towards the conflict.

American disinterest could prove costly for both the United States and Europe. For the United States, settling the Armenia-Azerbaijan conflict would carry two key benefits: improving energy security for European allies and reducing the risk of a conflict involving NATO member Turkey.

Putin previously met Aliyev and Sarkisian in August 2014 to discuss the conflict. Before that, Russia organized several presidential-level negotiations in 2011, 2008, and 2004. This stands in stark contrast with Western efforts, marked by abortive talks held in the United States in 2001 and in France in 2006.

In 2010, Aliyev and Sarkisian verbally agreed to some elements of the Madrid Principles, a basic outline for the peaceful resolution of the Armenia-Azerbaijan conflict. This plan includes a phased withdrawal of Armenian forces from Nagorno Karabakh and a final referendum on the territory’s political status. While Baku and Yerevan still dispute many issues, the Madrid Principles provide a strong foundation for compromise and a mediated settlement. On the surface, this makes the lack of progress in recent years surprising. Closer examination of Russia’s role in the South Caucasus indicates otherwise. Moscow, ostensibly pursuing a negotiated peace, benefits from an indefinite dispute.

Azerbaijan imports 85 percent of its weaponry from Russia. Baku’s energy wealth allows it to dramatically boost defense spending, even amidst falling oil prices. Azerbaijan’s military budget in 2003 was $163 million. By 2014, the country was spending $4.8 billion on defense, far outmatching rival Armenia’s $3.2 billion budget.

Armenia simply cannot afford the same degree of military prowess as Azerbaijan. As Baku grows stronger, Armenia becomes more dependent on Russia for security. Yerevan occasionally registers a complaint with its powerful patron over arms sales to Azerbaijan, but Armenia can do little more than that. At the same time, Baku risks war with Russia if it attacks its western neighbor, as Moscow is bound to Armenia by the Collective Security Treaty Organization’s mutual defense agreement. The commander of the Russian military base in Gyumri, Armenia, reported in 2013 that his troops would intervene on Yerevan’s behalf if Azerbaijan attempted to retake Karabakh by force. However, these statements are of questionable value to Armenia, as they have never been confirmed by Russia’s top officials.

Despite the dangers associated with renewed conflict, Baku and Yerevan are demonstrating a growing willingness to test one another’s patience. Over the past month, Armenian and Azerbaijani media have frequently reported ceasefire violations by the other side. These incidents come after months of intermittent fighting on the line of contact.

Eventually, Azerbaijan may determine that retaking Nagorno Karabakh is worth the risk. If Russia entered the fray, it would undoubtedly result in a catastrophic defeat for Baku. However, Moscow could remain on the sidelines, on the basis that Nagorno Karabakh is not part of Armenia’s internationally recognized territory and is therefore not protected by the CSTO. In this case, the conflict’s outcome might be less decisive. A protracted struggle could develop with or without Russian intervention, endangering prospective energy projects in the Caspian Sea basin and damage existing infrastructure. This would benefit Russia, which perceives Western energy enterprises in the area as threatening its dominant position in the European oil and gas market.

Would Russia really abandon its Armenian ally in a war with Azerbaijan? It is certainly possible. If Russia did fail to intervene on Armenia’s behalf, Yerevan would have little room to rebuke the Kremlin for its duplicity. Years of Russian protection have steadily eroded Armenian sovereignty. The Russian border guards who patrol Armenia’s frontiers and the 5,000 soldiers stationed in Gyumri are only the tip of the iceberg: Moscow’s influence now extends far beyond military affairs. As of 2008, Russia controlled 80 percent of Armenian energy infrastructure. In June 2015, Yerevan announced plans to sell an Armenia-Iran natural gas pipeline to Gazprom, further entrenching Russia’s position in the small South Caucasus republic. Armenia is a member of the Kremlin-led Eurasian Economic Union and Russia is the country’s single largest import and export partner. All of these factors grant Russia a wider range of policy options in the South Caucasus at Armenia’s expense.

What is clear is that Russia is unlikely to mediate in good faith as long as it can control the initiative in the Nagorno Karabakh dispute and profit from the conflict’s perpetuation. For Moscow, revenue from arms sales to Armenia and Azerbaijan, political leverage in the South Caucasus, and protection of Russian energy interests all come before a peaceful settlement. This does not bode well for the United States or its European allies.

Escalating hostilities might endanger emerging energy projects such as the Trans-Anatolian Natural Gas Pipeline (TANAP). This system is the first to bring Caspian natural gas to Europe, drawing supplies from Azerbaijan via Turkey and Georgia. The project would help diversify Europe’s energy supplies, making Russian influence vis-à-vis Gazprom less potent. This should be especially important for the United States, as current energy politics make it difficult for Washington and its European allies to respond in concert to the Ukraine crisis.

Although TANAP’s planned terminus is in Azerbaijan, in the future, the route could link up with sources in Iraqi Kurdistan, Central Asia, and even Iran. Even without these additional outlets, the system promises to reach a capacity of 31 billion cubic meters of gas by 2026. Renewed conflict in the South Caucasus could delay all of these prospects. With TANAP construction underway as of March 2015, workers and equipment are also placed at risk.

In addition to threatening European energy security, another South Caucasus war could draw in other regional powers like Turkey. Ankara previously played a significant role in the active phase of the Nagorno Karabakh War (as did Russia). To demonstrate solidarity with Baku, Turkey sealed the border with Armenia and instituted a blockade in 1993, measures that remain in place today. Turkish officers also trained the Azerbaijani military.

Turkey and Armenia lack diplomatic ties. If Ankara became involved again, it might find pretext to invoke Article V of the North Atlantic Treaty, the charter’s mutual defense clause (Turkey already threatened such a move over Syrian Civil War spillover). In this eventuality, the United States and other NATO members would be drawn into a conflict directly on Russia’s doorstep, something that would undoubtedly poison already strained relations between Moscow and the West. If the United States can induce Turkish cooperation, Ankara’s position would be a valuable asset in conflict mediation rather than a liability in regional security.

Armenia is strategically insecure, but it also maintains control over Nagorno Karabakh two decades after the active phase of the conflict ended. Because of this, Armenia may perceive little need to make concessions.

That being said, diplomatic normalization with Turkey and an end to the land blockade on Armenia’s western border are objectives Yerevan cannot achieve under the status quo. Washington can help facilitate normalization between its Turkish ally and Armenia in exchange for settlement of Karabakh. In this scenario, Armenia can yield on certain issues relating to Azerbaijan while still getting an economic and political return. Terminating the blockade and normalizing relations would improve Armenia’s economy and help alleviate its isolation.

Turkey would reap several benefits as well. The country wishes to enter into a free trade agreement with the Eurasian Union, in which Armenia is a member. Open borders and stable diplomatic ties could make such a move less complicated for Ankara. Turkey also has a 30 percent share in the TANAP project, meaning it would benefit from a stable environment in the South Caucasus.

A framework for peace already exists. While challenges will arise, the United States can and should commit itself to a consistent negotiation process on Nagorno Karabakh. Renewed warfare would carry negative ramifications well beyond the South Caucasus. Armenia and Azerbaijan need a mediating partner that benefits from peace in the region, not perpetual conflict.

Evan Gottesman is an editorial intern at The National Interest.