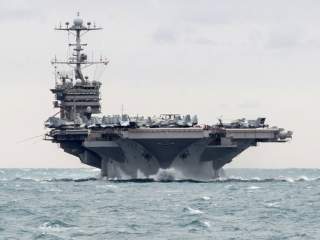 The United States is entering a new era of great power competition facing off against a resurgent Russia and a reemerging China. As such, the United States has to prioritize its defense spending to meet those rising challenges—which Washington will start to do with President Barack Obama’s 2017 budget proposal, announced this week.

“These challenges reflect a return to great power of competition. First is in Europe, where we're taking a strong and balanced approach to deter Russian aggression, and we haven't had to worry about this for twenty-five years,” U.S. defense secretary Ashton Carter told an audience at the Washington Economic Club on Tuesday. “Second is in the Asia-Pacific, where China is rising and where we're continuing and will continue our rebalance.”

While great power confrontations have existed since before Athens faced off against Sparta in the Great Peloponnesian War that ended about 2,400 years ago, this new confrontation will be different. The United States won’t just face off against Russia and China in the air, on land or at sea. Washington will also have to confront Moscow and Beijing in the emerging cyberspace and electronic warfare domains.

“We will be prepared for a high-end enemy. That's what we call full spectrum. In our budget, our plans, our capabilities and our actions, we must demonstrate to potential foes, that if they start a war, we have the capability to win. Because the force that can deter conflict, must show that it can dominate a conflict,” Carter said. “In this context, Russia and China are our most stressing competitors. They have developed and are continuing to advance military systems that seek to threaten our advantages in specific areas. And in some case, they are developing weapons and ways of wars that seek to achieve their objectives rapidly, before they hope, we can respond.”

To counter Russian aggression in the European theatre, the Pentagon is taking some important steps. The goal is to ultimately enable U.S. forces in the region to rapidly form a highly capable combined arms ground force that can respond across that theater by the end of 2017.

“In Pentagon parlance, this is called the European Reassurance Initiative and after requesting about $800 million for last year, this year we're more than quadrupling it for a total of $3.4 billion in 2017, “ Carter said. “That will fund a lot of things: more rotational U.S. forces in Europe, more training and exercising with our allies, more preposition and war-fighting gear and infrastructure improvements to support all this.”

Longer term, the United States will have to invest in new technologies as Russia, China and other potential adversaries try to match American capabilities in areas such as precision-guided munitions, stealth, cyber and space. As a part of Washington’s response to evermore capable Russian and Chinese military forces, the Pentagon’s research and development budget will grow to $71.4 billion in 2017.

Some of the new investments—which are being run by the Strategic Capabilities Office—include 3D printing technology, rail guns, cyber warfare, space warfare, advanced navigation and networking technologies. Some of these technologies will enable new types of less expensive smart bombs.

“What the SCO's doing is taking the same kinds of micro-cameras, sensors, and so forth that are littered throughout our smartphones and everything today, and putting them on our small diameter bombs to augment the existing target capabilities on the SDB [small diameter bomb],” Carter said. “This will eventually be a modular kit that will work with many other payloads, enabling off network targeting through commercial components, small enough to hold in your hand like your phone, and cheap enough to own like your phone.”

Carter also highlighted swarming drone technology. “Another project uses swarming autonomous vehicles in all sorts of ways and in multiple domains. In the air, they develop micro-drones that are really fast, really resistant. They can fly through heavy winds and be kicked out the back of a fighter jet moving at Mach 0.9, like they did during an operational exercise in Alaska last year, or they can be thrown into the air by a soldier in the middle of the Iraqi desert, “Carter said. “And for the water, they've developed self-driving boats which can network together to do all kinds of missions, from fleet defense to close-in surveillance, without putting sailors at risk.”

Another project will take an existing aircraft—almost certainly a Boeing B-52—and turn it into a next-generation twenty-first century weapon. “The last project I want to highlight is one that we're calling the arsenal plane, which takes one of our oldest aircraft platforms and turns it into a flying launchpad for all sorts of different conventional payloads,” Carter said. “In practice, the arsenal plane will function as a very large airborne magazine, networked to fifth generation aircraft that act as forward sensor and targeting nodes, essentially combining different systems already in our inventory to create whole new capabilities.”

Meanwhile, Carter is directing the Navy to continue investments in the submarine force to maintain American dominance. The undersea domain is an area where Russia has made huge investments and could pose a big challenge in the years ahead. “The budget invests over $8.1 billion in 2017 and more than $40 billion over the next five years to give us the most lethal undersea and any submarine force in the world,” Carter said. “It buys more advanced maritime control aircraft. And it not only buys nine of our most advanced Virginia Class attack submarines over the next five years, it also equips more of them with a versatile Virginia payloads module, which triples each submarine's platform strike capacity from twelve Tomahawk missiles to forty.”

But the Pentagon’s new focus on high-end warfare against peer level threats like Russia and China means that there will have to be tradeoffs. Certain capabilities that were geared towards fighting in low to medium level threat environments are going to be truncated to accommodate weapons that can go toe-to-toe with Moscow and Beijing.

“Budgets often require tradeoffs, which all of you in your own domains are very familiar with. So where tradeoffs among force structure, modernization and readiness posture needed to be made—we generally pushed to favor the latter too. This is important because our military has to have the agility and ability to win not only the wars that could happen today, but also the wars that could happen in the future,” Carter said. “To put more money in submarines, Navy fighter jets and a lot of other important areas, one trade-off we made was to buy only as many Littoral Combat Ships as we really need. This is part of a broader effort in our budget to focus the Navy on having greater lethality and capability that can turn deter and defeat even the most high-end future threats.”

Ultimately, the message from the Pentagon is that while it will still keep an eye on lesser threats like ISIS and Al Qaeda, the United States understands that other great powers are a real threat to American security. Moving past the last fifteen years, the United States military is once again focusing on great power conflict.