America Is Selling More Arms to the Netherlands, Finland and Kuwait. Here is the Rundown. 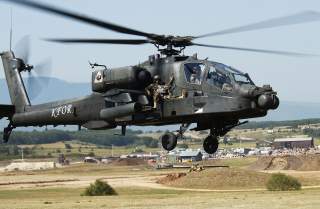 Of the three potential deals, the Dutch AH-64E is probably the most prominent.

“The State Department has made a determination approving a possible Foreign Military Sale to the Netherlands of items and services to support the upgrade/remanufacture of AH-64D Block II Apache Attack Helicopters to the AH-64E configuration for an estimated cost of $1.191 billion,” the State Department’s Bureau of Political-Military Affairs stated on Feb. 20. “The Defense Security Cooperation Agency delivered the required certification notifying Congress of this possible sale today.”

As the State Department notes, the Dutch have requested a remanufacturing deal to rebuild 28 existing AH-64D Block II Apaches into the new AH-64E configuration. As part of the deal, 51 General Electric T700-GE-701C engines would be upgraded to the T700-GE-701D configuration. A host of other sensors and avionics would also be similarly upgraded.

Meanwhile, Finland hopes to purchase the Mk-41 vertical launch system, which can host a variety of naval missiles ranging from the Standard SM-2 to the Tomahawk land attack cruise missile.

The Mk-41s launchers would be installed onboard four new corvettes that the Finns plan to build.

“Finland intends to use the vertical launching systems on four new construction corvettes that will make up the Finnish Navy's Squadron 2020,” the State Department said. “The vertical launching systems will enable Finland to acquire missiles that will significantly enhance the Finnish Navy's area defense capabilities over critical air-and-sea-lines of trade and communication.  The proposed sale of the Mk 41 will increase the Finnish Navy's maritime partnership, interoperability, and regional security capability.  Finland has not purchased the Mk 41 previously, but will have no difficulty incorporating this capability into its armed forces.”

The Kuwaitis will use the boats in a coast guard-like role.

“Kuwait intends to use the boats for patrol, interdiction, and maritime protection,” the State Department said. “These boats will help Kuwait develop and maintain a strong and ready self-defense capability.  Kuwait will have no difficulty absorbing this equipment into its armed forces.”

Thus, business continues to be robust on the arms sale front.