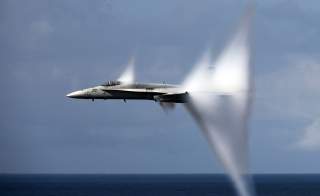 China’s only aircraft carrier in service, the Liaoning, is now in the South China Sea for a six-day drill that began on Thursday, state papers have confirmed.

Reuters has also reported that the Liaoning strike group has sailed into waters close to the southern province of Hainan, flanked by 40 other warships and submarines, as seen in a satellite image.

Observers believe these vessels may be from the People’s Liberation Army Navy’s three major fleets, as Beijing wants a variety of vessels from different naval command regions to sail with the Liaoning to hone their inter-fleet interoperability.

Yet it appears that the Chinese carrier has no intention of strutting its stuff in waters troubled by territorial disputes. Chinese papers say the exercise is meant to address the slew of flaws and deficiencies that have been exposed in the years since the inauguration of the ship, which began its PLA Navy service as a refurbished Soviet hull.

Global Times has also noted that to attain a genuine blue-water-navy stature, the PLA’s maritime force still has a lot of catching up to do. One aspect is the evolution from a mixed-combat model to a carrier-oriented one to cope with more missions and voyages in the high seas.

Beijing adopted a dovish tone when the US aircraft carrier Theodore Roosevelt, nicknamed “the Big Stick,” arrived in Singapore for a scheduled port visit and R&R this week, and the Nimitz-class nuclear-powered carrier’s strike group has joined forces with warships from allies while en route to the center of the South China Sea.

Meanwhile, the European Union’s head of security policy, Francois Rivasseau, told The Australian Financial Review that the possibility of European navies conducting “freedom of navigation” patrols in the South China Sea could not be ruled out in the future.

The US, Japan, Australia and India are promoting cooperation through the Quadrilateral Security Dialogue, and Britain is reportedly considering sending a warship to the region as well.

Still, a China-US carrier-to-carrier face-off in the South China Sea is highly unlikely given the obvious disparity in capabilities.

Analysts outside China now have a clearer understanding of the Liaoning, after years of observation and a close-up look at the carrier when it was docked in Hong Kong last July.

The consensus appears to be that the Liaoning is more like “a big toy” for symbolic deterrence, a training carrier with deficiencies resulting from its design and retrofit, as well as the Chinese navy’s inexperience in marshaling a modern sea-going strike group, even though PLA generals and sailors are quick learners.

Meanwhile a separate report appeared in the PLA Daily on Thursday saying that the current drill was meant to test “new navigation and communication systems as well as new planes” mounted on the carrier, without providing further details of the new installations.

A commentary that appeared in on the website of China News Service said the focus of the latest Liaoning deployment should be on its fleet of new shipborne fighters, as the J-15, a copycat of the antiquated Soviet-designed Sukhoi Su-33, is a non-starter in wrestling air superiority against the short-takeoff and vertical-landing variant of America’s stealthy F-35s.

“The J-31 can pair up with J-15s and J-20s in the future in tasks of both high and low altitudes, both onshore and offshore,” that report said.