America vs. Russia: When Will Hypersonic Weapons Change the Way We Wage War? 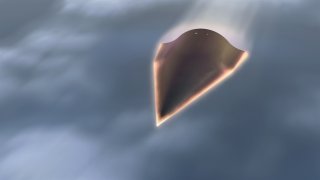 In previous articles, we examined the capabilities of the entire range of existing strategic nuclear weapons, including intercontinental ballistic missiles (ICBMs), ballistic-missile submarines and strategic bombers. We have also assessed the capabilities of existing and prospective missile-defense systems in Russia and the United States. There is another promising technology that can affect the future strategic balance: hypersonic weapons. In fact, any weapon can be considered hypersonic that can achieve a velocity higher than Mach 5 (Mach 1 is the sound propagation velocity, which is 767 miles per hour in air at low altitude and at 20 degrees Celsius). Both the United States and Russia are actively conducting developments in this area, as is China.

The Russian hypersonic weapons that are closest to production are Zircon antiship sea-launched missiles and X-32 air-launched cruise missiles. The information available about testing the Zircon is rather contradictory. According to one source, a successful test took place this year, during which the missile achieved Mach 8 speed; according to another, less authoritative, source, no tests have taken place. Judging by the information available in open sources, Zircon would be able to reach speeds of Mach 5 or 6, and hit targets at a distance of at least four hundred kilometers. The Russian army’s phase-in timing of the product is still unclear. Dates previously offered for deployment are 2019–20, but in reality, the development of such a new and complex product could drag on until the mid-2020s.

However, the X-32 cruise missile, which is being developed specifically for the modernized long-range Tu-22M3M bomber, is already at the final stage of testing; its phase-in is expected in the near future. This is explained by the missile’s slower Mach 4 to 4.5 flight speed. In addition, the missile flies on a special trajectory, covering most of its distance at an altitude of forty to forty-five kilometers and then diving to the target, which reduces air resistance and heating. Accordingly, this model minimizes missile overheating and electronics failure due to the formation of a plasma cloud around the missile, two main problems of hypersonic flight. On the other hand, the speed reached is not excessively high; in fact, the X-32 is a border-class missile positioned between supersonic and hypersonic.

The third project, perhaps the most complex and promising, is the creation of a hypersonic glide vehicle for the prospective heavy liquid-fueled RS-28 Sarmat ICBM. This project is most often referred to as “Object 4202” or U71. Unlike a conventional warhead, which also enters the atmosphere at hypersonic speeds, the glider leaves space much earlier, flying hundreds or even thousands of kilometers in the atmosphere, making it able to maneuver and fly along a trajectory different from that of a simple ballistic missile. This makes it almost impossible for antiballistic missile systems to intercept the glider. In addition, gliders can be homed onto targets with much higher accuracy than conventional warheads, which will allow using nonnuclear warheads at intercontinental distances.

The latest tests of the U-71 have been called successful so far, but it does not necessarily mean that the product is close to mass production; that depends on reaching specific parameters, such as the ability to achieve a certain desired speed. One way or another, work on the project seems to be going well, and given the delays in creating the Sarmat ICBM, it is quite possible that Object 4202 will arrive just in time for the start of production on the RS-28, which will most likely happen in the early-to-mid-2020s.

In the United States, hypersonic projects have developed roughly along the same path as in Russia. For a long time, the work to create hypersonic gliders was performed within the framework of the Prompt Global Strike Initiative. Two tests were conducted for each of the competing Advanced Hypersonic Weapon (AHW) and Hypersonic Technology Vehicle 2 (HTV-2) projects. Only one of those—the AHW test in 2011—was successful, although there were no details provided. The last test launch was conducted in 2014 and was unsuccessful. The main problem encountered by the developers was the loss of communication with the aircraft during the flight (both tests of the HTV-2 ended in that fashion). Apparently, problems arose due to the formation of a plasma cloud around the glider, and the consequent onboard electronics failure. Solving this problem is the cornerstone of hypersonic-technology development in general. The DARPA Falcon project was closed and, accordingly, no further work on the HTV-2 is planned. As for the AHW, there is no information as to whether there will be any further testing.

Additionally, the United States is actively collaborating with Australia within the framework of the HIFiRE (Hypersonic International Flight Research Experimentation Program) research project. Within this program, several launches of hypersonic aircraft were carried out, and the last one, carried out on July 12, 2017, was successful. The hypersonic glider was able to reach Mach 7.5 (5,710 mph) speed during the penultimate tests, while no data has been published on the most recent launch. It is known that the aim of the project is to study the behavior of hypersonic gliders entering the atmosphere from a launch vehicle and conducting maneuvers.

Another new project to create a hypersonic glider is the Tactical Boost Glide (TBG) vehicle funded by DARPA (the Defense Advanced Research Projects Agency). The development of the glider is being handled by Lockheed Martin, which has already received $147 million for the project. The development will draw on the experience gained during work on HTV-2.

In considering the creation of hypersonic cruise missiles, two research projects are worth noting: the X-43A missile, which is able to accelerate to Mach 9.65 (the engine only worked for eleven seconds), and the more advanced X-51 WaveRider missile, which accelerated to a speed of Mach 5.1 (6,100 kilometers per hour) at an altitude of about eighteen kilometers during its last successful test in 2013, with the flight lasting about six minutes and covering a distance of 426 kilometers. This result showed that the United States has at least a working prototype of a hypersonic scramjet engine required for the flight of cruise missiles of this class, and that the problem with the structure thermal stability has been solved as well. However, the X-51 was not even supposed to have a guidance system and warhead installed—although ensuring the stable operation of electronics in an aircraft flying at hypersonic speed is one of the most difficult tasks.

Apparently, this task will be solved within the framework of projects such as the HAWC (Hypersonic Air-breathing Weapon Concept) program funded by DARPA. Raytheon and Lockheed Martin are involved in this project as well. In the long term, results obtained during the project will likely be implemented by the High Speed ​​Strike Weapon (HSSW) hypersonic cruise missile, which is planned to be gradually introduced in the mid-2020s. Raytheon and Lockheed Martin have already received $174.7 million and $171.2 million, respectively, for the development of HAWC.

Yet another promising project is the creation of the SR-72 hypersonic unmanned reconnaissance aircraft. Lockheed Martin is working on this project to develop a drone capable of reaching Mach 6. The U.S. Army’s introduction of this aircraft is planned for the early 2030s.

China: Too Classified for Objective Analysis

China is also developing technology to create hypersonic weapons. To date, the only well-known Chinese project in this area is the DF-ZF hypersonic glide vehicle (previously called Wu-14 by the media). There have already been seven tests of this glider—whose results are quite difficult to judge, since all available information is based solely on U.S. intelligence. Judging from media reports, the DZ-ZF reached speeds between Mach 5 and Mach 10 during the tests. Given the rather large number of launches in a short time (the first flight was carried out in 2014), it can be assumed that its development is advancing reasonably well.

How Soon Will Hypersonic Weapons Change the World?

It is becoming clear that many more years of persistent and costly work will be required for the creation of production models of hypersonic weapons. If we add a few years to the planned terms (as such complex projects are rarely finished on time), we can conclude that the countries will get no hypersonic gliders, cruise missiles or, certainly, hypersonic aircraft before the mid-to-late 2020s. At the same time, according to the available information, Russia is one step closer than the others, although the gap with competitors is minimal.

The world will definitely not become any safer the day hypersonic weaponry is finally deployed. The ability to deliver high-precision, rapid and nonnuclear strikes across the planet will tempt many to try to carry out a lightning-fast, disarming strike against their opponent. That is why the fact that at least three countries are participating in this race, and may accomplish their goals more or less instantaneously, is nothing but good news—since the acquisition of such weapons by only one country would inevitably lead to a breakdown in the existing balance of forces currently maintained through nuclear deterrence.