Is America Willing to Wage War Against China to Save the Status-Quo? 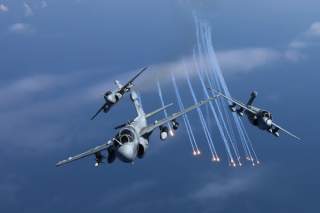 The Obama administration has never plainly acknowledged that it faces a major challenge from China to the US-led order in Asia, and it has therefore never clearly explained its strategy to deal with that challenge. Because it has never been clearly explained, the strategy has never been carefully scrutinized to see whether it has a credible chance of working. Instead it has slowly become accepted as orthodoxy among the US foreign and strategic policy community without serious debate.

But we all know what the strategy is. It is to take advantage of China’s own assertive behaviour to build anxiety about China’s ambitions among its neighbors, and then harness that anxiety to assemble a coalition which will act together diplomatically to compel China to abandon its challenge, leaving the US-led order intact.

Few if any outside China would question the aim of this strategy. We can all agree that it would be great if it worked, because the regional order based on uncontested US primacy has kept Asia stable, peaceful and prosperous for decades, and nothing would serve us better than for it to last for ever.

But will it work? Robert Manning and Jim Przystup are confident it will. In their generous and well-reasoned article at East Asia Forum, they counter my argument for building a new order in Asia by arguing first that any alternative order would not be as good as the old one, and second that the strategy of building a coalition to push back diplomatically against China is working fine. Why change things to accommodate China’s ambitions, they ask, if China can be persuaded to abandon them?

I agree with the first of these arguments but not with the second. I like the old order best, but I don’t think the strategy to preserve it is working. And as it fails I fear that Washington will be left with only two disastrous options: either withdrawal from Asia or war with China. It is to avoid either of these outcomes that I advocate a new order to accommodate with China.

There are three reasons to doubt that Washington’s current strategy is working. First, it overestimates the resolve of America’s friends and allies in Asia. Certainly they are worried by China’s growing power and assertiveness, but there are real limits to their willingness to damage their relations with China in order to support America’s strategy to preserve Asia’s strategic status quo ante.

No country demonstrates these limits more plainly than Australia. Australia is America’s oldest, closest and most loyal ally in Asia, and it is happy to offer rhetorical support when Washington criticizes Beijing. But Canberra places immense importance on relations with China, and has shown no willingness to take steps that jeopardize them. They refuse even to consider making a choice between the United States and China.

Second, Washington’s strategy underestimates China’s resolve. It assumes that China under Xi Jinping will back off in the face of diplomatic pressure from the United States and its Asian friends and allies. This might happen if the stakes were merely the rocks and reefs of the South China Sea, but they are much bigger than that.

China’s challenge to US leadership in Asia is about restoring China’s place as a great power, or the great power, in Asia after centuries of subjugation and humiliation. This is an absolutely fundamental objective for China’s leaders, and achieving it is seen as essential to the long term legitimacy of the Chinese Communist Party. China is at least as determined to change the regional order as the United States is to preserve it.

So, as has become perfectly clear over the past 12 months, mere diplomatic gestures will not deter China from using the South China Sea disputes to challenge US power in Asia. Only the clear threat of a conflict with America would do that. And China does not believe that it faces such a threat.

This brings us to the third weakness in Washington’s strategy: it overestimates the deterrent effect of US military power in Asia today. Washington’s diplomatic offensive might work if it was backed by a credible threat of military action. But China’s whole posture shows it does not take that threat seriously; on the contrary it is clear that China believes America will back off rather than risk a clash with China.

We can see why: the all-too-public debates and unedifying muddles over ‘freedom of navigation’ operations show just how reluctant Washington is to risk a clash that might escalate into conflict. And they are right to be reluctant, as China well knows: despite overall US preponderance, the asymmetries of a US–China war in the Western Pacific today mean there is little chance of a swift US victory, and a serious risk that major escalation might only be avoided if Washington blinked first. The US presidential elections so far only compound Chinese impressions that US resolve is unlikely to strengthen in the future.

The reality is that no one in Washington has seriously asked the key question: is America willing to fight a war with China to preserve the current order in Asia? Until that question has been plainly asked and unambiguously answered in the affirmative, Washington has little chance of deterring China. And my hunch is that the answer will be in the negative.

If that is right, then the chances of preserving the old order in Asia are very low indeed, and that is why it seems worth exploring what other kinds of order might take its place. We should look for a new order that maximises America’s role while minimising US–China rivalry. That would involve many compromises that most of us will be unwilling to make. The only reason to contemplate them is that they are better than the alternatives.

Hugh White is Professor in the Strategic and Defence Studies Centre at The Australian National University.