America's 6th-Generation Fighter: The F-22 Raptor Rises from the Ashes? 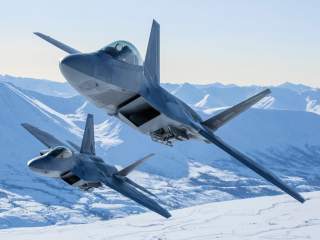 The Pentagon erred in prematurely terminating the stealthy Lockheed Martin F-22 Raptor air superiority fighter program—having miscalculated how quickly the Russians and Chinese would develop new aircraft. While the Raptor is not likely to brought back into production, the Air Force and Navy have started work on a next generation air superiority capability.

The basic problem stems from a mistake that was made in the aftermath of the Cold War. During the 1990s and the early 2000s—with the Soviet threat evaporating—the Defense Department did not anticipate facing off against a near-peer threat in the foreseeable future. That assessment was wrong—as Russian and Chinese developments have shown.

“The department and the Congress made a decision that we would not see a near-peer threat within a number of years, and that decision also proved to be—and that judgment—also proved to be optimistic,” Lt. Gen. James Holmes, Air Force deputy chief of staff for strategic plans and requirements told the Senate Armed Services Committee on March 8. “We’ve seen both Russia and China develop airplanes much faster than was anticipated.”

Holmes added that air superiority in the context of modern air defenses is more than just pure air-to-air combat—aircraft have to be able to destroy systems like the S-400 or neutralize those threats with electronic warfare or cyber attacks. “We’ll have to continue to spend money to improve the capability of both the F-22 and the F-15 while we work our way through to a replacement,” Holmes said. On the gap between America’s superior capabilities and those of other nations, Holmes said, “We need to make that bigger again.”

So far, the Pentagon has not looked at the possibility of reopening the Raptor line because it would cost a lot of money. However, it is not outside the realm of possibility that a contractor might bid a modernized Raptor or F-35 for the Next Generation Air Dominance program that’s aimed at replacing the F-22 and F-15C. “The Air Force and the Navy have been collaborating on a future capability that was called the Next Generation Air Dominance platform,” Holmes said. “We’ve worked together in our studies, worked together on providing technology together.”

While the original plan was to start a joint analysis of alternatives for a next-generation air superiority machine, the Navy has already kicked off its study after the Air Force deferred its program. “We delayed a year because we wanted to take a broader look at the picture,” Holmes said. “We’ll move forward next year.”

But because the service needs a new fighter by the 2030s, the Air Force might not have the time to develop a completely new jet from scratch, it is possible that the a modernized F-22 might rise from the ashes. “Because we want to do it faster and we can’t afford to do another twenty-year development program for a host of reasons, we’ll try to go with technology that’s at a high readiness level now,” Holmes said. “I think it’s completely possible as we get to a requirement that there may be competitors that bid on a modification of an existing technology or platform like the F-22 and the F-35.”

Thus, the Raptor could one day—like the mythical Phoenix—rise from its ashes.