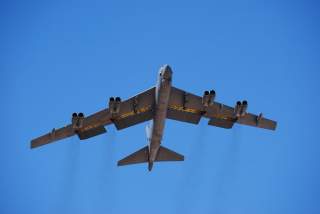 U.S. Air Force Secretary Deborah James visited the Council on Foreign Relations late last month to discuss the present and future of the Air Force. James, who was confirmed as the twenty-third Secretary of the Air Force in December 2013, spoke on a number of capabilities and institutional challenges within the Air Force, everything from the nuclear enterprise reform to proposed platform retirement. Her bottom line—repeated often—was that available resources are falling far short of the Air Force’s growing responsibilities.

- In operations against the self-proclaimed Islamic State, the Air Force has conducted 70 percent of the roughly 2,800 coalition airstrikes across  Iraq and Syria. Additionally, the Air Force’s intelligence, surveillance, and reconnaissance (ISR) platforms have helped coordinate the missions and actions of all other coalition partners.

- Less visibly, the Air Force has also provided virtually all aerial refueling—95 percent of all tanker sorties—throughout Operation Inherent Resolve. This has formed the logistical backbone of the entire operation.

- This sustained capability comes at a cost. The U.S. Air Force is the smallest it has been since its inception in 1947. The aircraft are the oldest they have ever been; the average aircraft is twenty-seven years old.

- The equivalent of the sixth-generation fighter, intended to ensure air dominance past 2030, may not be an aircraft at all. Hypersonics, quantum computing, and directed energy are just some of the potential “game-changers” under discussion. James emphasized the need to combine air, space and cyber in order to make this happen.

- Nuclear capability is the Air Force’s number one modernization priority. In the FY16 budget, as well as the accompanying five-year plan, there is an additional $5.6 billion allocated for nuclear enterprise. In addition, James would like to bolster the 8,800 airmen currently assigned to the mission.

- Impossible choices loom in the event of budgetary sequester. The Air Force has requested $10 billion dollars above the Budget Control Act’s mandatory caps. If a compromise is not reached, according to James, the Air Force must make ends meet with likely elimination of the U-2, Global Hawk Block 40, and KC-10 fleets.

The bottom line is that the current political and budgetary environment—rife with conflict, scarce on resources—has thrown the Air Force a curve ball. Air Force officials intended to reconstitute the force as the war in Afghanistan wound down. The Russian invasion of Ukraine, the rise of the Islamic State, and the Ebola emergency response have thrown that plan out the window. More needed than ever, the Air Force is steeling for another tough year ahead.

This piece first appeared in CFR's Defense in Depth here.