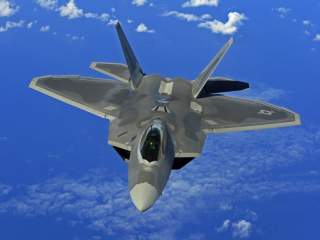 American air supremacy is in a bear market of long-term decline with no end in sight. The RAND Corporation recently determined: “continuous improvements to Chinese air capabilities make it increasingly difficult for the United States to achieve air superiority within a politically and operationally effective time frame. . . .” These improvements are part of the reason the Center for Strategic and International Studies considers that: “ at the current rate of U.S. capability development, the balance of military power in the [Asia-Pacific] region is shifting against the United States.”

"The advantage that we had from the air, I can honestly say, is shrinking. . . . This is not just a Pacific problem. It’s as significant in Europe as it is anywhere else on the planet . . . . I don't think it's controversial to say they've closed the gap in capability."

America’s current air supremacy rests on the F-15 fighter fleet complemented by small numbers of F-22s. The elderly F-15s are though having problems handling the latest, new-build Russian and Chinese fighters. In assessing performance against the Russian Su-35 fighter (now being acquired by China), the National Interest’s Dave Majumdar observes: “Overall, if all things were equal, even a fully upgraded F-15C with the latest AESA upgrades would have its hands full . . . .”

As regards the much higher performance F-22, only about ninety are available for global air supremacy tasks. This is arguably too small for winning air supremacy in one theatre, let alone both Europe and the Pacific. Ongoing peacetime training attrition is further gradually reducing this small fleet. The 2009 decision ceasing F-22 production early was based in part on beliefs that it was irrelevant to countering Islamic extremists or the counterinsurgency wars in Iraq and Afghanistan. Events have now overtaken this perspective.

Today, the dangers of a resurgent Russia and a more assertive China have become both more apparent and important. America’s current air supremacy force structure remains highly effective for wars against third world tyrants, such as Saddam Hussein in 2003. These kinds of wars though are not the only conflicts now possible. Instead, there is a growing need to be able to deter, and potentially to win, wars involving near-peer competitors.

Some consider the F-35 Joint Strike Fighter will in time address declining air supremacy. Countering this sanguine view, the worrying RAND study earlier noted included the F-35 (and the F-22) albeit not the new Chinese J-20 or J-31 stealth aircraft. This study, in looking at 2017, may actually understate what China will be capable of later this decade when it has more than 1,000 advanced fighters in service.

So what? Does air supremacy matter? Air supremacy will not win a war but it will stop a war being lost. America has not won a war without air supremacy—a point that has been widely recognised. It’s no surprise that China sees air superiority as one of the key “Three Superiorities” that can decide a conflict’s outcome. Nor is it a surprise that a major part of Russia’s force modernisation is fighter development and procurement.

The still-in-development F-35’s contribution to future American air supremacy is mixed. The aircraft was designed as a short-range aircraft primarily for attacking ground targets while having a secondary air-to-air capability. Twenty years ago American air supremacy was unquestioned except for Russian-built SAM systems that the F-35 was built to defeat. But times change, albeit the F-35’s 1990’s era airframe design cannot.

Given that, the F-35s avionics have now been tweaked to compensate for the F-35’s designed-in constrained air-to-air fighting capabilities. The idea is that data received from the aircraft’s onboard systems fused with information from accompanying aircraft and distant sensors will provide the pilot with a god’s eye view of the battlefield. With this, the pilot will be able to kill hostile aircraft at long range before opposing fighters can close and engage the F-35 where it is weakest. Close-in manoeuvrability is then irrelevant. There are several concerns with this concept.

Data fusion is an inherently complex business. Before every flight the F-35’s mission data files must be updated with the latest electronic signatures of friendly and hostile forces. Without this, the pilot’s god’s eye view may be inaccurate and dangerously misleading. In broad terms, the process involves advanced in-theatre and national intelligence, surveillance and reconnaissance systems collecting the tetra-bytes of data necessary, skilled teams analysing this before on-forwarding to the United States, on-call software teams quickly translating the evolving tactical circumstances into mission data files and then retransmitting back out to the field to load onto each F-35 before every sortie.

Complicating this, the electronic order of battle continually evolves during conflicts as adversaries and allies tweak and modify their equipment and tactics to win tactical advantage. When the F-35 was designed, the envisaged wars of choice were relatively slow paced. Today, the F-35’s data hungry approach essential for it to prevail in long-range air combat may be challenged in encounters with near-peer adversaries using advanced electronic and cyber warfare techniques.

In such fast-paced conflicts, both sides will try to create electronic confusion and uncertainty. If the F-35’s mission data files do not reflect the real world accurately, pilots may fire missiles against incorrectly identified electronic blips—friendly, neutral or civilian aircraft may be at risk. Of course, an F-35 in an uncertain situation could close and visually identify the target aircraft before engaging however, this makes the F-35 vulnerable given its poor manoeuvrability.

In thinking about future wars against peer adversaries, the F-35s single-track air combat approach combat appears strong but brittle. In having the potential for catastrophic sudden failure, this approach reflects the best and worst of the once-fashionable Revolution in Military Affairs (RMA). If everything goes well the battlefield would be completely transparent. If not, then all bets are off.

The 1990’s RMA thinking neglected that battlefields are full of intelligent, cunning adversaries actively working to quickly exploit weaknesses. In this regard, the F-35’s air combat approach is similarly vulnerable to electronic deception, tactical innovations, technological developments and active distraction techniques. In some respects, the F-35 has fragility designed in.

Such doubts raise worries over deterrence. Deterring both an unwanted war with China and future Russian adventurism requires both countries’ decision makers having no hesitations about America’s ability to achieve air supremacy wherever and whenever it wants. The F-35’s design does not inherently give that perception and instead may suggest exploitable vulnerabilities.

Such issues of course are recognized. In 2014, General Hostage, then-commander of USAF’s Air Combat Command summed up the issue:

What to do? The USAF and USN are now beginning new fighter programs but this is a slow process with the new fighters not likely to enter service in meaningful numbers until about 2040. In the intervening next twenty plus years, hopes rest on the F-35 although this is a problematic strategy. Not surprisingly, aircraft manufacturers are proposing upgrades; in this Boeing offers two alternatives.

The lower cost F-15 2040C option would modify the current USAF F-15 fighter fleet to carry twice as many air-to-air missiles, allowing these when using data links to act as dumb “shooters” for F-22 dumb smart “spotters.” The more costly alternative is the F-15 Silent Eagle, an extensive redesign incorporating significant stealth features. Israel, an F-35 customer, has apparently sought the F-15SE as part of a compensation package for agreeing to the Iran nuclear deal. Both options bring benefits albeit there are real doubts of them bringing long-lasting gains given they rely on a forty-year-old design countering new Russian and Chinese fighters. By the time they entered service they might already be outclassed.

There is another, arguably better, alternative between doing nothing and the new fighters arriving in 2035: doing as President Reagan did. Similarly faced with declining American capabilities, Reagan decided in 1981 to restart production of the B-1 and C-5 boosting near-term capabilities. Today, thirty years after Reagan’s decision, the B-1 remains essential and the C-5 provides the USAF’s primary dedicated strategic airlift capability.

The Reagan solution, call it the Gipper play, would be to restart F-22 production and build another two hundred or so. This would confidently fill the air supremacy gap between now and 2040. Both Russian and Chinese decision makers alike would need to factor in a robust American air supremacy capability when contemplating any rash actions. There are several counter arguments.

First, Defense Secretary Gates argued in 2009 that other aircraft could do the F-22’s tasks. Since then this argument has been undermined by the sharp rise of Chinese, and the unexpected return of Russian, airpower. By comparison, in 2008 worries about future near-peer competitors were muted (especially concerning Russia), there was high confidence that F-35 development was nearing completion and that the F-35 mass produced in large numbers was a suitable solution.