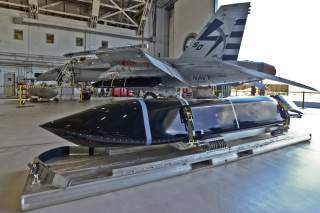 Beginning as a Lockheed Martin, DARPA and Office of Naval Research effort, the LRASM program is developing a high-tech air and surface launched weapon for the Navy and Air Force.

While many of the particulars of the new sensor for the weapon are not available for security reasons, BAE Systems developers do explain the technology in a general way.

For instance, BAE developers say the precision routing and guidance technology of the sensor, which doesn’t rely exclusively on intelligence, surveillance, and reconnaissance systems, networking links, or GPS navigation, enables the missile to operate effectively in contested domains and all weather conditions, day or night.

“Our differentiator is that our technology can sense, identify, and help target moving ships from a great distance. With our LRASM sensor, we’ve transitioned our world-class electronic warfare capabilities from other platforms to a missile system with extremely low size, weight, and power constraints,” BAE LRASM Program Manager, Joseph Mancini, told Scout Warrior.

BAE Systems is a subcontractor to main LRASM developer Lockheed Martin. Production of the sensor comes shortly after Lockheed received the first LRASM production contract award from the Navy and Air Force.

Once operational, LRASM will give Navy ships a short and long-range missile with an advanced targeting and guidance system able to partially guide its way to enemy targets and achieve pinpoint strikes in open or shallow water.

With a range of at least 200 nautical miles, LRASM is designed to use next-generation guidance technology to help track and eliminate targets such as enemy ships, shallow submarines, drones, aircraft and land-based targets, according to Lockheed Martin developers.

"The program will use autonomous guidance to find targets, reducing reliance on networking, GPS and other assets that could be compromised by enemy electronic weapons," a statement from the Office of Naval Research said.

The Navy has previously released LRASM from an F/A-18 Super Hornet, involving a "jettison release" of the weapon designed to validate the aerodynamic separation models of the missile, developers explained.

The development of LRASM is entirely consistent with the Navy’s existing “distributed lethality” strategy which seeks to better arm the fleet with long-range precision offensive and defensive firepower.

Part of the rationale to move back toward open or “blue water” combat capability against near-peer competitors emphasized during the Cold War. While the strategic and tactical capability never disappeared, it was emphasized less during the last 10-plus years of ground wars wherein the Navy focused on counter-terrorism, counter-piracy and things like Visit Board Search and Seizure. These missions are, of course, still important, however the Navy seeks to substantially increase its offensive “lethality” in order to deter or be effective against high-tech adversaries.

Lockheed Martin and the Navy have previously test fired Long Range Anti-Ship Missile from a new deck-mounted launcher as a way to expand options for the weapon, increase possible deployments and widen the range of potential targets, industry officials said.

A deck-mounted firing technology enables LRASM to fire from a much wider range of Navy ships, to include the Littoral Combat Ship and its more survivable variant - a Frigate.

The previous flight test, at White Sands Missile Range, New Mexico, was designed to demonstrate the missile’s ability to conduct an angled launch from a newly designed topside canister, replicating a ship-launched environment.

The missile has previously been test fired from a Navy ship-firing technology called Vertical Launch Systems currently on both cruisers and destroyers – as a way to provide long-range surface-to-surface and surface-to-air offensive firepower. The adaptation of the surface-launcher weapon, which could be operational by the mid-2020s, would use the same missile that fires from a Mk 41 Vertical Launch System and capitalize upon some existing Harpoon-launching technology, Lockheed developers explained.

"During the test, the LRASM, its Mk-114 booster and booster adapter ejected cleanly from the topside launcher using the same launch control and launch sequencer software currently employed by the Mk-41 Vertical Launch System (VLS)," a Lockheed statement said.