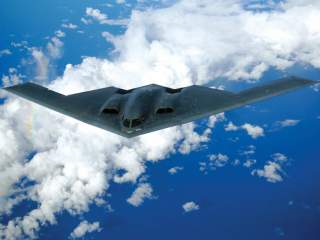 While the U.S. Air Force’s next-generation Long Range Strike Bomber (LRS-B) contract is mired in protests, the service has to rely on an increasingly geriatric fleet of long-range strategic bombers to meet its global obligations. Only a tiny portion of the Air Force bomber fleet—some twenty Northrop Grumman B-2 Spirits—has the ability to penetrate enemy airspace—for now.

The mainstay of the Air Force bomber fleet is the Boeing B-52, which first flew in 1952. Of the 744 jets that were originally built, only seventy-six upgraded B-52H aircraft remain in service. Those aircraft—which no longer have the ability to penetrate modern enemy air defenses—will serve into the 2040s carrying nuclear and conventionally armed long-range cruise missiles or dropping precision-guided bombs in permissive threat environments. Meanwhile, the Air Force’s fleet of sixty-two supersonic Rockwell International B-1B Lancers have been de-nuclearized and are only capable of fighting in moderately contested airspace. Those 1980s vintage aircraft will also serve into the 2040s.

The Air Force’s surviving fleet of twenty B-2 stealth bombers remain the only long-range penetrating strike assets in the Pentagon’s inventory. Just a few years ago, the Air Force had twenty-one B-2s, but one of the roughly $2 billion jets was lost to an accident in 2008 at Andersen Air Force Base on Guam. That means that on any given day, the Air Force only has a handful of jets available for operations. Consequently, the loss of even a single additional airframe will result in a significant drop in overall capacity.

According to the Congressional Research Service, only sixteen B-2s are combat coded. Of those, only about nine are mission capable at any one time. That number drops further if one takes into account aircraft that are tasked with training sorties. Indeed, one senior Air Force official said that it’s not unheard of for the fleet to drop to as few as six available jets. The rest of the B-2 fleet is down for routine maintenance or in the depot. The B-2 had a forty-seven percent mission capable rate in 2013, but those figures seem to have improved somewhat in recent years but still hovers below sixty percent.

While the Air Force is investing money to improve the B-2 and keep it relevant until its projected retirement date of 2058, the aircraft’s technology is nonetheless dated. Stealth technology has advanced since the B-2 was conceptualized in the late 1970s. Moreover, much of the avionics onboard the increasingly venerable bomber has been rendered obsolete over the course of its service life—as have the jet’s engines. Indeed, in 2012, then Air Force chief of staff Gen. Norton Schwartz told the House Armed Services Committee that the B-2 is starting to lose its ability penetrate hostile airspace. “The technology on which they were designed with respect to signature management. . . is ‘80s vintage,” Schwartz told the House Armed Services Committee on Feb. 28, 2012. “And the reality is that the B-2 over time is going to become less survivable in contested airspace.”

If one accepts the premise that the greatest challenge the United States will face over the coming decades is in the Pacific, long-range penetrating strike capabilities will come at the premium. The current U.S. Air Force bomber fleet is unequal to the task of overcoming the Chinese threat in the Western Pacific. Further, the Air Force might discover that its mass of tactical fighters is of limited value in that vast theatre. Given the enormous distances and the increasing vulnerability of bases and support assets in the region, long-range strike is likely to be far more useful than short-range tactical fighters. Restarting the B-2 line would be pointless, but the Pentagon needs to get the LRS-B program on track and fielded in numbers as soon as possible.