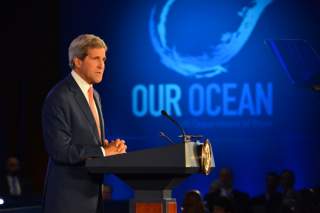 James Jay Carafano’s June 5th The National Interest column (“Welcome to Obama’s War on Weather”) attempts to take President Obama to task. He suggests that Obama has failed to follow a true grand strategy by substituting a desultory focus on the national security implications of climate change. What Carafano misses, and what the president and many in the foreign policy making community understand, is that responding to climate change will be among the most important challenges the United States will face in the coming decades.

During his address to the graduating cadets at West Point, Obama told the future leaders of the U.S. Army that climate change will be a creeping national security crisis that will help shape your time in uniform, as we are called on to respond to refugee flows and natural disasters and conflicts over water and food.

This is not merely, in Carafano’s words, fighting “against the weather.” Rather, it is retooling U.S. grand strategy to respond to a world that faces destructive disruption in the critical areas that underpin human prosperity and stability: agriculture, water, energy, and the humanitarian response required when those disruptions overwhelm the capacity of nations around the world.

Fears that climate change is a threat worth planning for are not a peculiar obsession of this president or administration. Rather, the U.S. military and intelligence community have, for the past several years, been concerned that environmental stress may create scenarios of great political risk. In 2008, the National Intelligence Council published its assessment of future risks, listing the scarcity-causing effects of a warming world, especially highlighting the odds that  water scarcity may “lead to increasingly heated interstate recriminations and possibly to low-level armed conflicts.” In recent years, documents such as the Quadrennial Defense Review (QDR) and Threat Assessments from the Office of the Director of National Intelligence have echoed those concerns. The 2014 QDR called climate change a “threat multiplier”—a factor that would aggravate state weakness, potentially undermining the legitimacy of governments that failed to respond adequately. Similarly, the most recent Worldwide Threat Assessment discussed how resource scarcity in food and water, exacerbated by climate change, risked being a point of friction for bilateral relations, especially in those cases where critical water resources are shared by multiple nations (China, India, and Pakistan, for example).

What is the role of U.S. grand strategy in these situations?

As President Obama indicated in his speech, American leadership on fashioning international consensus on emissions reductions is essential to avoiding future damage. Concrete American action is necessary, but it is only the first step. Beyond that, assisting other nations, particularly in the developing world, in adapting to the worst of what is to come will be essential.

Such an effort requires the full complement of the U.S. diplomatic and development arsenal—identifying where and how cooperation in building sustainable development makes sense. This is why the U.S. State Department has a Special Envoy for Climate Change and the Department of Energy participates in the  Clean Energy Ministerial and prioritizes cooperative research with the People’s Republic of China.

This sort of planning is not tangential to our national security. When nations fail in their measures to adapt to climate change—when disasters occur, or when governments steadily decline in their ability to handle resource scarcity, and these crises lead to situations of armed conflict—then we may enter the dimension where military solutions will be necessary.

It is here where the U.S. military has already demonstrated its impressive capabilities. Very often, the U.S. military has been called on to respond to natural disasters; ours is unique among the navies of the world in its ability to reach anywhere on the globe in a matter of hours. The U.S. military responded quickly with humanitarian assistance/disaster relief (HADR) activities after floods ravaged Pakistan in 2010, and in the Philippines after Typhoon Haiyan in 2013. In a world impacted by climate change, the U.S. military and its partner militaries around the world may find themselves reacting more often to more serious disasters.

It is in this context that Admiral Samuel Locklear, III, Commander-in-Chief of Pacific Command (CINC-PACOM), last year told The Boston Globe’s Brian Bender that climate change is the likeliest factor “that will cripple the security environment, probably more likely than the other scenarios we all often talk about” and that this concern has driven him to raise it on the agenda with counterpart navies throughout the Pacific. It is why Brigadier General James Linder, commander of U.S. Special Operations Forces in Africa, considers it among the critical issues taxing the resiliency of partner nations in Africa. “On time-lapse satellite imagery, you literally can watch the desert moving south” he told Eliza Griswold in a New York Times analysis of the U.S. military’s assistance priorities in Africa.

The place of climate change in the headlines may ebb and flow, especially compared to the traditional categories inter- or intrastate violence that mark the Syrian civil war or the offensive by ISIS against the Iraqi government. Over the coming decades, however, it is highly likely that those disruptions that are of such concern to military planners now will only grow in frequency and severity. Responding to those effects will require a coordinated global response. The United States will be well-positioned to avoid persistent instability in the international system if it plans for the strategic implications now.