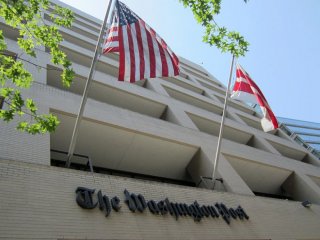 All major American newspapers have adopted Wilsonianism to a greater or lesser degree, Robert Kaplan, a Senior Fellow at the Center for a New American Security, said at an event hosted by the Center for the National Interest on Thursday.

The event featured a panel discussion on national security in the changing media landscape. In addition to Kaplan, Henry Farrell, a professor at George Washington University and Monkey Cage contributor, and the National Interest’s Jacob Heilbrunn, sat on the panel. The Atlantic’s Steve Clemons moderated.

Kaplan began the discussion by noting that in tackling national security, the editorial boards of U.S. legacy media outlets like the New York Times, Wall Street Journal and Washington Post, “mostly discuss values.” All three editorial boards adopt the Wilsonian view that if the United States doesn’t actively spread democracy across the globe, “we are not living up to our values.”

The major difference between the editorial pages of the three newspapers, Kaplan contended, is the Wall Street Journal’s editorials are more militant Wilsonian (though the most interesting to read), whereas the New York Times’ editorials are more moderate Wilsonian. The Washington Post editorial page falls somewhere in between, according to Kaplan, although it has veered to the more militant Wilsonian end of the spectrum in recent years.

Still, except for a brief period around 2006 and 2007 when the Iraq War was at its low, the editorial pages of the newspapers have largely eschewed realism in favor of Wilsonian foreign policies. Kaplan argued that this is because “quasimilitant Wilsonianism” has become deeply embedded in the American political tradition, which—unlike the rest of the world—has rarely had to worry about more fundamental matters like how to maintain order. As a result, the only time realism is popular among the media elite is in the brief moments after the start of something “demonstrably wrong,” like the Iraq War, Kaplan observed.

The other panelists largely agreed with this assessment, but noted other factors that could be at work. For example, as alluded to in the recent National Interest cover story he co-authored with Carden, Heilbrunn pointed out that many of the media elite put great faith in the Yeltsin era in Russia and were deeply disillusioned when it didn’t usher in the liberal democracy in Moscow for which they had hoped. These media elite seem to be constantly refighting that battle, he said, not only in their editorials on Russia, but with most other countries as well.

Clemons believed some of the blame fell on the realists themselves, who he argued had become complacent in recent decades. Clemons noted that realists didn’t have the deep networks and institutional infrastructure to connect them to the media in the same way that the neoconservatives and liberal hawks do. He also pointed to other factors, such as the fact that value-ridden and activist arguments tend to gain better traction on social-media sites than nuanced realist viewpoints.

Farrell disagreed. He argued that while highly charged and partisan arguments do well with cable-news audiences, social and online media has introduced more pluralism into political debates. Instead, Farrell felt the bigger threat to objective and informative news sources was the “buzzfeedication” of online media.

The Irish-born Farrell also expressed alarm at how “incapable” U.S. newspapers are of understanding the viewpoints of people in other countries. In a similar vein, Kaplan mourned the decline of the traditional foreign correspondent; that is, highly educated Western journalists that speak three or four languages and spend a number of years reporting from the countries they cover. While expensive for newspapers to maintain, Kaplan praised these reporters for their ability to be objective about the countries they covered, because they did not have any personal interests vested in the outcomes. By contrast, Kaplan pointed to the “super stringers” that have replaced these reporters. According to him, these are usually local cosmopolitan elites who have been educated at the best Western universities, but then return to their home countries to report for major American newspapers. Unlike the foreign correspondent, they can have stakes in the outcomes of the events they are covering, negatively impacting their ability to report on them.