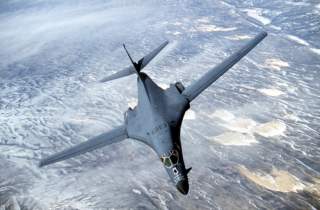 Australia woke up to media news this morning that U.S. B-1 strategic bombers would be “coming to Australia to deter Beijing’s South China Sea ambitions.” This referred to a statement made by U.S. Defense Department Assistant Secretary for Asian and Pacific Security, David Shear, during a testimony before the U.S. Senate Foreign Relations Committee on Wednesday. As part of his answer as to what the government was doing in response to China’s assertive behavior in the South China Sea, Shear also stated that the US “will be placing additional Air Force assets in Australia as well,” including B-1 bombers and surveillance aircraft. However, a statement by a spokesperson for Defense Minister Kevin Andrews said that the “U.S. Government has contacted us to advise that the official misspoke.’ Thus, the U.S. Embassy in Canberra is likely to correct Shear’s statement.

There is indeed no reason to doubt that Shear simply confused the B-1 bomber with the B-52 bombers which have already rotated (as opposed to being ‘based’ there) through Australian air bases in the North, as part of the US ‘strategic rebalance’ and the U.S.-Australia force posture initiatives agreed upon in 2011 to make U.S. forward military presence in Asia more flexible and sustainable. His full answer to the question merely lists U.S. force posture activities in the broader region that the U.S. has already announced or implemented. This includes for instance the rotational deployment of up to four Littoral Combat Ships (LCSs) by 2018 through Singapore. It also would have been counterproductive for the U.S. government to make a unilateral announcement without first having cleared the deployment with the Australian side. Finally, it’s difficult to see what the rotational deployment of a strategic bomber would do to deter China’s current maritime activities in the South China Sea, particular its land reclamation projects in disputed areas.

For all these reasons, the big news is ‘much ado about nothing,’ triggered by Shear’s confusion between the two types of strategic bombers in the U.S. arsenal. The real news is that the issue over China’s behavior in the South China Sea is heating up. US Defense Secretary Ashton Carter is reportedly considering sending US warships and aircraft to operate within 12 miles or less of the new islands China is building in the South China Sea. Early this week, the PLA frigate Yancheng also closely trailed the USS Forth Worth (LCS) operating in the Spratly Islands. China’s uncompromising behavior to change the territorial status quo in the South China Sea increasingly puts pressure on its neighbors and other regional countries, including Australia, to formulate a response that practically demonstrates shared interests in unfettered access to the high seas.