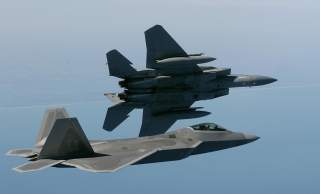 Even as the U.S. Air Force is considering retiring its fleet of Boeing F-15C Eagles, the venerable air superiority fighter is showing just how capable it remains after decades in service.

“We do have capacity in the F-16C community to recapitalize that radar to serve the same function as the F-15 has done and thereby reduce the different systems that we have to sustain and operate, so that makes it more efficient,” West told the Congress.

But even just a year ago, Air Force officials including then Air Combat Command commander Gen. Herbert “Hawk” Carlisle and his predecessor Gen. Mike Hostage would often state that the service needed more dedicated air superiority assets because of the shortage of Lockheed Martin F-22 Raptors. The service ultimately procured less than half of the F-22s it needed to recapitalize it air superiority fleet and replace the F-15C. As such, both Carlisle and Hostage had often stated that the F-22/F-15C team would be continue as the Air Force’s air superiority force indefinitely.

It is a combination that performs spectacularly well as a recent Air Force exercise once again demonstrated during a recent Weapons Systems Evaluation Program (WSEP) exercise—also known as Combat Archer—and a follow-on multinational exercise at Eglin AFB, Florida. The exercise included not only F-22s and F-15Cs, but also F-16s and Lockheed Martin F-35s. To add to the mix, the Royal Canadian Air Force deployed a number of Boeing CF-18 Hornets to the exercise.

“The second piece of the deployment was large force exercises and 4-ship training which is the core fighting force in the Eagle,” said Col. William Bladen, 104th Fighter Wing, Operations Group Commander, in an Air Force release. “With several other fighter airframes on the Gulf Coast, we were able to put together daily outnumbered scenarios that we cannot produce up here at Barnes. The last day of the trip we flew 4 F-15s and 4 F-22s against 14 ‘red air’ fighters. For our training, we allowed the red air to regenerate after being killed by a blue air fighter. The final results of that mission: Blue Air killed 41 enemy aircraft and lost just one. While pretty phenomenal, perfection is our goal so the debrief focused on how we could have had a 41-0 ratio."

The exercise reiterated just how lethal the F-22/F-15C combination truly is. Indeed, the Air Force recognizes that fact. It is likely that floating the idea of retiring the F-15C—which is considered by many to be the single greatest air superiority fighter ever built—might simply be a ‘test balloon’ to coax more funding out of the Congress. It’s very possible that the F-15C will the flying well past the mid-2020s that the Air Force is proposing as a potential retirement date.