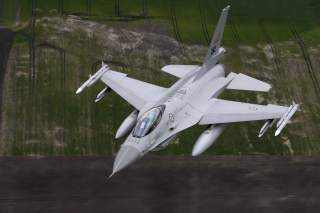 Col. David Abba, commander of the 53rd Wing based at Eglin Air Force Base, Florida—the parent unit of the 53rd WEG—also commented on the event. “Most satisfying words on a WSEP shot after ‘Fox, Fox’... ‘Clear the drone!!,’” Abba said on his twitter account. “Way to go WEG, 83 FWS, & 82 ATRS!”

Unfortunately, the QF-16 was not recoverable after the shoot down, Abba noted.

Usually, the Air Force tries to recover its target drone aircraft—which are worth millions of dollars. Normally, if a missile passes within lethal radius of the QF-16, it will count as a kill. However, sometimes the missile physically hits the target and the drone is destroyed.

The QF-16 is replacing older jets such as the QF-4 Phantom II in the role of target drone. Not only was the Air Force running out of viable McDonnell Douglas F-4 airframes to convert, the older jets simply do not have the performance to replicate newer threats like the Russian Sukhoi Su-35S Flanker-E. According to Boeing the QF-16 can replicate 4th and 4.5 generation aircraft such as the Chinese J-11 Flanker copy or Russian Su-30SM Flanker-H.

The QF-16 retains the F-16’s full 9G supersonic envelope. In fact, it is probably more maneuverable than an operational Fighting Falcon due to the fact it is most often flown with clean wings with only the occasional ALQ-188 or ALQ-167 electronic warfare pod installed. It is a huge step up from earlier target drones in terms of flight performance and other operational parameters.

Boeing was recent awarded a contract to convert 18 more retired older-model F-16s into QF-16 target drones. That’s on top of earlier contracts to convert 25 jets in 2015 and 30 jets in 2016. The work should be completed by April 2027.