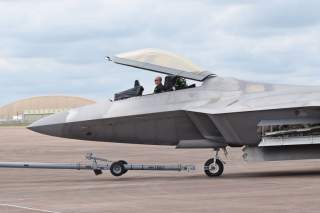 The United States, Russia and China all have one thing in common: they are all building some of the most advanced fighter jets in the world. Specifically, 5th generation fighters that, at least on paper, could dominate the skies for decades to come.

The planes that get the most interest, America's F-22, PAK-FA and J-20 all have their strengths and weaknesses, but could any really beat Washington's F-22 Raptor?

Could China's 5th generation fighter take down America in the sky?

While such a fight in the sky could literally mean World War III, sketching out the advantages and disadvantages the F-22 holds against either plane is important. So, for your reading pleasure, Dave Majumdar, TNI's Defense Editor, has analyzed  what would happen if the F-22 faced either plane in combat. Below, in two separate articles, packaged together in this posting, both published last year, we take the issue on. Let the battle begin.

This year marks a decade since the Lockheed Martin F-22 Raptor was declared operational with the U.S. Air Force.

Billed by many as the most capable air superiority fighter ever built, the Raptor only recently proved its mettle in combat over Syria and Iraq about a year ago. But the jet wasn’t used to annihilate a Soviet air armada over the Fulda Gap or rip apart an advanced enemy integrated air defense system as its designers had envisioned. Instead, the Raptor has most been relegated to the role of a flying sensor platform.

Nonetheless, the day is coming when the F-22 could face a foe that might have a chance of going toe-to-toe with it and winning—albeit a small one. Russia and China are hard at work developing the Chengdu J-20 and the Sukhoi T-50 PAK-FA. Of these two machines, the PAK-FA is probably the more serious challenger. Despite the collapse of the Soviet Union, Russia has somehow managed to retain a more or less credible defense industrial base—even if it’s just a shadow of its former self.

Everything about the PAK-FA suggests that it is similar in concept to the Raptor—being optimized as a fast, high flying and stealthy air superiority fighter. However, as one might expect, the Russians put more emphasis on certain characteristics and less on others.

One good example is stealth. The T-50’s design places far less emphasis on all-aspect low observables. Instead, it focuses on frontal aspect stealth—thus it has a so-called “Pac-Man” signature where as the F-22’s signature looks more like a spider if one were to look at it from a God’s eye view. Stealth is where the F-22 holds a huge advantage over the Russian jet.

In terms of sheer kinematics, the T-50 and the F-22 are probably comparable—especially once the PAK-FA receives new engines. The Russian jet’s current Izdeliye 117 engines are decent, but ultimately the plane will need to reequipped with the developmental Izdeliye 30 motors to fully exploit the capabilities of its airframe.

Both aircraft are capable of cruising faster than the speed of sound. The Raptor is able to maintain a hair over Mach 1.8 without afterburners while the PAK-FA can probably do at least Mach 1.6 without the blowers engaged. Max operational altitude is 60,000ft for the F-22 and is probably similar for the T-50. For max speed, the Raptor is redlined at Mach 2.0 because of the limitations of it radar absorbent materials, I would expect a similar limit for the Sukhoi.

While the F-22 might be holding a better hand when it comes to stealth, the Russians have the edge in maneuverability. The T-50 is equipped with three-dimensional thrust vectoring and all indications seem point to the PAK-FA having an edge in terms of agility. The Russians are also likely to have a helmet-mounted cuing system and high off-boresight missile integrated on the PAK-FA from day one.

Meanwhile, the Raptor will finally have the AIM-9X integrated in 2017 and the Air Force is slowing stumbling toward getting a helmet-mounted cuing system onboard the F-22 by 2020. On the plus side, given the state of the Russian economy, the PAK-FA probably won’t be operational by then.

In terms of avionics, the Raptor probably has the edge in terms of sensor fusion and pilot-vehicle interface. The Russian don’t have the best track record for developing user-friendly cockpits—one look at the cockpit of a MiG-29 tells the story. But they are getting better. Overall sensor performance might be comparable, Russians make decent radars and they have excellent electronic warfare systems.

All things being equal, if stealth turns out to be everything it’s cracked up to be against a peer-level threat, the PAK-FA could be at a distinctive disadvantage. If the U.S. Air Force’s faith in stealth proves to be a fallacy, the PAK-FA holds the edge. But in the end, war has takes on a life of its own and it’s hard to predict an outcome with any certainty.