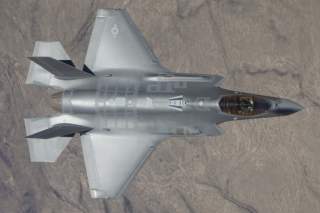 The F-35 Joint Strike Fighter program is the most expensive procurement program in Pentagon history. It’s been plagued by schedule delays, gross cost overruns, and a slew of underwhelming performance reviews. Last month the Air Force declared its variant “ready for combat,” and most press reports lauded this as a signal that the program had turned a corner. But a memo issued from the Pentagon’s top testing official, based largely upon the Air Force’s own test data, showed that the Air Force’s declaration was wildly premature.

Dr. Michael Gilmore’s latest memorandum is damning. The F-35 program has derailed to the point where it “is actually not on a path toward success, but instead on a path toward failing to deliver the full Block 3F capabilities for which the Department is paying almost $400 billion.” The 16-page memo,first reported by Tony Capaccio at Bloomberg and then by others, details just how troubled this program is: years behind schedule and failing to deliver even the most basic capabilities taxpayers, and the men and women who will entrust their lives to it, have been told to expect.

The Pentagon’s top testing office warns that the F-35 is in no way ready for combat since it is “not effective and not suitable across the required mission areas and against currently fielded threats.” As it stands now, the F-35 would need to run away from combat and have other planes come to its rescue, since it “will need support to locate and avoid modern threats, acquire targets, and engage formations of enemy fighter aircraft due to outstanding performance deficiencies and limited weapons carriage available (i.e., two bombs and two air-to-air missiles).” In several instances, the memo rated the F-35A less capable than the aircraft we already have.

The memo from the Director, Operational Test & Evaluation makes very clear that the constant stream of positive pronouncements made by the Joint Program Office and Air Force generals have been false. Statements that General Hawk Carlisle, the Air Force’s Air Combat Commander, recently made to the press and that Joint Program Office chief Lt. Gen. Christopher Bogdan has made in testimony on Capitol Hill are directly contradicted by the facts reported in the memorandum. “The F-35A will be the most dominant aircraft in our inventory because it can go where our legacy aircraft cannot and provide the capabilities our commanders need on the modern battlefield,” General Carlisle said during the IOC announcement. According to Dr. Gilmore, however, this is not the case and there is evidence that the Air Force knew this already. Before declaring its variant ready for combat the Air Force conducted and presumably read its own evaluation. The DOT&E memo clearly states that the findings contained within are “fully consistent” with the official report of the Air Force’s own internal IOC Readiness Assessment Team report.

This memo is a brutally revealing assessment of the F-35’s performance deficiencies. It’s important to note that Congress and the public know of these severe and debilitating deficiencies only because Congress mandated an independent testing office with broad bipartisan support in 1983—and because the present director is a person of independence and integrity.

The Air Force stated to Congress that its Initial Operational Capability (“combat ready”) declaration would be based on the ability of the current F-35A (Block 3i) to perform three basic missions: close air support, interdiction, and limited attacks on enemy air defenses.

The services are taking delivery of new F-35s in succeeding “block” versions, each adding increments to the previous block’s incomplete combat capabilities. The version equipping the Air Force’s IOC squadron, the Block 3i, is an interim version in which the earlier Block 2B’s obsolete computer has been replaced with a new one. Meanwhile, schedule slippage continues on the F-35 program’s Block 3F development effort, intended to incorporate all the contractually mandated combat capabilities.

The Air Force’s current configuration can only carry two long range air-to-air missiles (but no dogfighting short-range heat-seeking missiles) and two bombs to attack targets on the ground. This very limited weapons load-out is the result of ongoing software deficiencies, not of any potential (though untested) ability of the plane to carry more types of weapons. Larger numbers of weapons would have to be carried externally, however, which compromises the aircraft’s range and stealth.

The next software version, Block 3F which is currently suffering major development problems, should eventually allow the F-35 to employ the larger variety of weapons originally specified in 2001, but these planes are still years away from being operationally tested, much less actually reaching the fleet. So for the time being, even if the current F-35 could perform in combat (which DOT&E’s memorandum makes clear it can’t), the small and non-diverse ammo load means any fight the F-35 finds itself in had better be a short one.

Another of the F-35’s basic shortcomings is the lack of a usable cannon. The Block 3i aircraft lacks the ability to employ the cannon because the software needed for it is a Block 3F development and has yet to be completed. This issue has been reported many times before. Now we learn that there are doubts that the most recent version of the plane’s complicated helmet, which is the only way to aim the cannon,will be accurate enough to reliably hit air-to-air or ground targets.

This latest DOT&E report also makes public another problem with the cannon on the Air Force’s variant of the plane, the F-35A. This is the only variant that includes an internal cannon. The variants for the Marine Corps and Navy both use an external belly-mounted gun pod. In order to keep the F-35A stealthy, the internal cannon sits behind a small door that opens when the cannon is fired. The Air Force proudly released a video of the first time an F-35A test fired its cannon in flight. Now we know that the simple action of opening the small door causes the plane to turn slightly because of the door’s drag, possibly enough to cause the cannon to miss. The DOT&E memo reports that these door-induced aiming errors “exceed accuracy specifications” which will make it quite difficult for pilots to hit targets. And since the Air Force’s F-35 only holds 181 rounds—as opposed to 511 for the F-16 and 1,100 for the A-10—every bullet will count.

As the debate continues about the future of the close air support mission, one thing is certain: the F-35 simply is not ready to support ground troops, and there are plenty of reasons to doubt it ever will be.

This latest DOT&E memorandum undermines one of the fundamental arguments in favor of the F-35 in the CAS role: that the F-35 will need to provide close air support in places with high levels of enemy air defenses, a mission that would require stealth capabilities. But the battles in which CAS is needed don’t generally take place in areas where there are high levels of enemy air defenses. The memo points out that close air support is normally conducted in low-air defense threat environments. This is a simple acknowledgement of the “close” in close air support. When close air support is discussed, it is important to consider the entire military system, both air and ground forces. These forces support each other mutually. By the time the ground troops who engage the enemy in close combat get involved, our military has already cleared out the heavy air defense. And the enemy ground troops will not be dragging around bulky, lightly armored, slow-to-move, hard-to-resupply “high threat” missile systems into the battle area because they will be too busy maneuvering and dodging bullets in the ground fight.

Beyond that, the F-35’s ability to perform any CAS right now is extremely limited. As the DOT&E memorandum says clearly, “The F-35A in the Block 3i configuration has numerous limitations which make it less effective overall at CAS than most currently-fielded fighter aircraft like the F-15E, F-16, F-18 and A-10.” As mentioned earlier, the F-35A, now declared “Initially Operationally Capable,” can only carry two bombs, both of which are too big to be safely used near friendly troops. And even if these bombs could be used in CAS, the plane has to immediately fly back to its base to re-load after only one pass over an enemy formation. For F-35As that base is likely to be far from the battlefield since the plane needs an 8,000 foot concrete runway with a massive logistical footprint, thus seriously slowing CAS response times.

Air support for friendly troops fighting the enemy is exactly where the lack of a usable cannon is most distinctly felt—and the F-35 won’t have a usable and test-proven cannon until 2019 at best. Cannons are the most effective weapon in far more CAS situations than rockets (which the F-35A currently does not carry) or a couple of guided bombs (which it does). This is true especially when the plane needs to engage a target in a “danger close” situation, with the enemy in very close proximity to friendly troops. A GBU-12, the smaller of the two bombs the F-35A can currently employ, is a 500-pound bomb. At 250 meters (820 feet), a 500-pound bomb has a 10 percent chance of incapacitating a friendly soldier based on the military’s risk-estimate table. That might not seem like much, but history has proven that most firefights actually take place at considerably less than 100 meters. If F-35As are the aircraft providing CAS, this means that enemies closing with our troops will have plenty of room—150 meters or more—to maneuver free of fire from above.