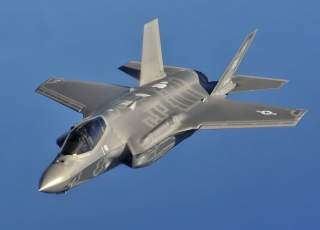 Adding a nuclear-capable F-35 to the air portion of the nuclear triad – to supplement the existing B-2, B-52 and emerging B-21 – will bring a new dimension to US nuclear attack options and potentially place a new level of pressure upon potential adversaries.

In written testimony, Defense Secretary James Mattis cited the F-35 as an indispensable element of US and NATO nuclear deterrence.

“Modernizing our dual-capable fighter bombers with next-generation F-35 fighter aircraft will maintain the strength of NATO’s deterrence posture and maintain our ability to forward deploy nuclear weapons, should the security situation demand it,” his testimony states.

Mattis also cited the emergence of the F-35 as a “nuclear delivery system” in the context of expressing grave concern that US nuclear weapons modernization has not, in recent years, kept pace with a fast-changing global threat environment.

“Nuclear delivery system development over the last eight years shows numerous advances by Russia, China, and North Korea versus the near absence of such activity by the United States, with competitors and adversaries’ developing 34 new systems as compared to only one for the U.S.—the F-35 aircraft,” Mattis said in written statements.

Officials with the Office of the Secretary of Defense confirmed to Warrior Maven that Mattis here is indeed referring to an emerging “nuclear variant” of the F-35. Multiple news reports, such as Business Insider, cite senior officials saying a nuclear-armed F-35 is slated to emerge in the early 2020s, if not sooner. The F-35 is equipped to carry the B-61 nuclear bomb, according to a report in Air Force Magazine.

It makes sense that the F-35 would increasingly be called upon to function as a key element of US nuclear deterrence strategy; in recent months, F-35s deployed to the Pacific theater to participate in military exercises over the Korean Peninsula. The weapons, ISR technolgoy and multi-role functions of the F-35 potentially provide a wide range of attack options should that be necessary in the region.

Utilizing speed, maneuverability and lower-altitude flight when compared to how a bomber such as a B-2 would operate, a nuclear-capable F-35 presents new threats to a potential adversary. In a tactical sense, it seems that a high-speed F-35, fortified by long-range sensors and targeting technologies, might be well positioned to identify and destroy mobile weapons launchers or other vital, yet slightly smaller on-the-move targets. As part of this equation, an F-35 might also be able to respond much more quickly, with low-yield nuclear weapons in the event that new intelligence information locating a new target emerges.

The F-35 recently completed a series of weapons separation tests and is currently able to be armed with the AIM-9X, AIM-120, AIM-132, GBU-12, JDAM, JSOW, SDB-1 and the Paveway IV, Lockheed Martin data states. While it is not yet clear exactly how a nuclear weapon might integrate onto the platform, the F-35 is configured to carry more than 3500 pounds of ordnance in stealth mode and over 18-thousand pounds uncontested.

While senior Pentagon leaders are understandably hesitant to discuss particular contingencies or attack scenarios, the NPR is quite clear that a more pro-active nuclear weapons posture is aimed at strengthening “deterrence.”

After analyzing the global threat calculus, the NPR calls for rapid inclusion of two additional nuclear weapons options – to include a sea-launched nuclear armed cruise missile.

“A nuclear-armed sea-launched cruise missile and the modification of a small number of existing submarine launched ballistic missile warheads to provide a low-yield option – will enhance deterrence by ensuring no adversary under any circumstances can perceive an advantage through limited nuclear escalation or other strategic attack,” Gen. Paul Selva, Vice Chairman of the Joint Chiefs of Staff, told reporters.

new nuclear warheads or will result in increasing the size of the nuclear stockpile. NPR DoD advocates further stress that the addition of these weapons does align with US non-proliferation commitments.

or paradox; in response to questions from lawmakers about whether adding new low-yield nuclear weapons could “lower the threshold” to nuclear war and therefore introduce new elements of danger, Mattis told Congress that increasing offensive nuclear-weapons attack capability will have the opposite effect, meaning the added weapons would improve deterrence and therefore enhance prospects for peace.

Alongside this strategic emphasis, Mattis also stressed that the NPR stipulates that nuclear weapons will only be used in the most extreme cases, adding that the “use of any nuclear weapon is a strategic game changer. Nuclear deterrence must be considered carefully.”

Citing the rapid technological progress of adversary air-defense systems, Mattis further elaborated that a sea-launched cruise missile option might be necessary to hold potential enemies at risk in the event that air-dropped low-yield weapons were challenged to operate above necessary targets.

“To drop a gravity bomb that is low-yield means a bomber would have to penetrate air defenses. Air defenses are very different than they were 20 years ago,” Mattis told Congress.

could hold enemy targets at risk in a high-tech threat environment where bombers were less able to operate.

weapons. In a manner quite consistent with the current NPR, senior Air Force weapons developers told Warrior Maven over the course of several interviews that, by strengthening deterrence, the addition of a new LRSO is expected to have the reverse – or “stabilizing” – effect by making it more difficult for a potential adversary to contemplate a first strike.

NPR proponents say a strengthened and more wide-reaching nuclear weapons approach is necessary, given the current threat environment which does, without question, seem to be raising the possibility of nuclear confrontation to a level not seen in years.

“We're concerned about: some of the adjustments in potential adversaries' thinking about nuclear weapons. With a greater reliance on nuclear weapons, a featuring of them, in some cases -- for example, in the Russian nuclear doctrine, called "Escalating to De-escalate". John Rood, Under Secretary of Defense for Policy told reporters when discussing the NPR.

-----Russia’s belief that limited nuclear first use, potentially including low-yield weapons, can provide such an advantage is based, in part, on Moscow’s perception that its greater number and variety of non-strategic nuclear systems provide a coercive advantage in crises and at lower levels of conflict. Recent Russian statements on this evolving nuclear weapons doctrine appear to lower the threshold for Moscow’s first-use of nuclear weapons ---

The text of the report specifically cites the importance of dual-capable aircraft (DCA) in Europe and states that the F-35 is fundamental to deterring Russia.

"We are committed to upgrading DCA with the nuclear-capable F-35 aircraft. We will work with NATO to best ensure—and improve where needed—the readiness, survivability, and operational effectiveness of DCA based in Europe," the Nuclear Posture Review states.

The NPR also seeks to accelerate ongoing efforts to modernize the air, sea and ground portions of the nuclear triad. DoD is immersed in current efforts to fast-track development and prototypes of a new Ground Based Strategic Deterrent ICBM, Air Force developers have told Warrior Maven.

Early prototyping, including expected prototype “shoot off” testing is slated for 2020, service developers have told Warrior Maven in recent interviews. Northrop Grumman and Boeing are both now under contract to build the new weapon. The Air Force plans to build at least 400 GBSDs, Air Force senior leaders have said.

Critical elements of the new ICBM, developed to replace the decades-old Minuteman IIIs, will feature a new engineering method along with advanced command control, circuitry and guidance systems, engineers have said.