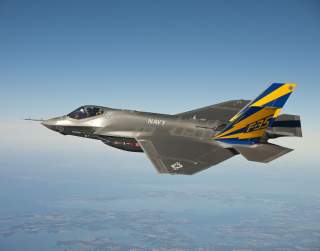 Recently revealed details concerning China’s Shenyang J-31 fighter suggest that the aircraft not only looks like the Pentagon’s Lockheed Martin F-35 Joint Strike Fighter (JSF), but it also offers comparable aerodynamic performance. But the real question is how far along Beijing has come in the development of subsystems like radars and engines. Moreover, there is the question of how well Chinese industry can integrate all of those disparate technologies into an operational aircraft.

On the surface, the J-31 looks very much like a twin-engine F-35 clone—and there are plenty of reasons to believe that the Chinese jet was based on stolen JSF technology—and could eventually be more or less a match for the American jet. “I think they’ll eventually be on par with our fifth-gen jets—as they should be, because industrial espionage is alive and well,” a senior U.S. military aviator told me last year.

But the Chinese don’t have to match the F-35 one-for-one. The Chinese just have to do enough damage to the U.S. military to make it too expensive to fight. Hypothetically, the air superiority oriented F-22 might be able to generate a kill ratio of thirty-to-one today against the Chinese J-11 Flanker, but the U.S. Air Force has only 120 combat coded Raptors. The Raptor might only generate a three-to-one kill ratio against the J-31 or J-20, which means attrition will take a serious toll on U.S. forces.   “When the J-20 and J-31 come around, even a three to one kill ratio advantage becomes costly,” a senior U.S. Air Force official told me late last year.

Where the J-31 is likely to fall short is on avionics—the aircraft’s radar, infrared search and track, data-links and especially sensor fusion. It’s comparatively simple perfecting individual pieces of hardware, but fusing all of the data from a multitude of sensors and off-board platforms is extremely difficult. Even the F-22 didn’t fuse Link-16 data with the rest of its onboard sensors until its Increment 3.2A software upgrade. It’s one of the reasons Lockheed has fallen behind on developing the F-35—and why Air Force and Joint Program Office officials continuous state their concerns about the jet’s software.

Then there is the question of if Chinese industry is up to the task of manufacturing the J-31. Stealth aircraft are built to very tight tolerances—one ten-thousandth of an inch was the standard for the F-22 and the F-35 has tighter requirements still. The Chinese have never demonstrated the ability to build to those kinds of tolerances. Nor have they been able to produce a reliable jet engine to date—so it will some time before China catches up to U.S. fifth-generation machines.

Even if the J-31 doesn’t quite match the F-35 technologically, one area the Chinese are currently investing in is a new long-range missile called the PL-15. It appears to be very similar to the European Meteor beyond visual range missile. Like the Meteor, the Chinese weapon is a ramjet powered missile, which should give it very long range and much better terminal phase performance than the venerable AIM-120 AMRAAM. The AMRAAM’s rocket motor burns for a few seconds and it coasts the rest of the way to the target—like most air-to-air weapons. Further, the AMRAAM is highly vulnerable to digital radio frequency memory jamming and needs to be replaced.

Air Combat Command (ACC) seems to finally be taking the threat seriously—since Air Force officials have been privately complaining about the problem for a while. “The PL-15 and the range of that missile, we’ve got to be able to out-stick that missile,” ACC commander Gen. Carlisle told Flightglobal.