America's F-35 vs. Russia or China's Best Fighters: Who Wins? 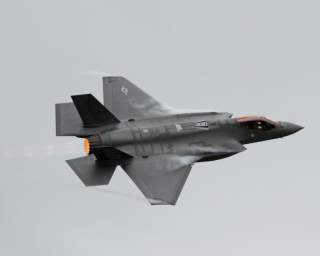 Recently, there has been much debate about how well or how poorly Lockheed Martin’s F-35 Joint Strike Fighter (JSF) would fair against other fighters—particularly against high-end Russian and Chinese aircraft.

It’s a debate that won’t be settled until the F-35 and J-20, J-31, PAK-FA or Su-35 meet in combat for the first time—and there are numerous other factors involved besides the aircraft themselves. It’s also largely a moot point. The Pentagon will likely end up buying thousands of F-35s, so like it or not, we are stuck with the “Lightning II” for good or ill.

The F-35’s detractors point to the fact that the stealthy single-engine jet didn’t fair very well against a relatively elderly two-seat Block 40 F-16D that was carrying two external fuel 370-gallon fuel tanks. The F-35A, which is the most agile of the three versions of the jet, was decisively shown to be less nimble than the older aircraft. But for most people who have been tracking this program, that’s not particularly unexpected.

Meanwhile, proponents of the F-35—primarily Lockheed Martin and the JSF program office (JPO)—tried to dismiss the results—aggressively calling out the War is Boring outlet by name. The company and the Pentagon claimed that the tests were not truly representative because the F-35 test article involved in the trial versus the F-16 was not equipped with a full set of avionics, didn’t have its stealth coatings, and did not use the jet’s helmet-mounted display and, moreover, was not equipped to simulate high off-boresight missiles like the AIM-9X Sidewinder. Besides, the F-35 was designed to fight from long-range—the JPO and Lockheed claimed.

Both sides of the debate are correct—but neither side is telling the whole story. As a good friend on the Hill recently told me: “In political communications, facts are an interesting aside, but are completely irrelevant. What we do here is spin.” That’s exactly what’s happening here—both sides are selectively cherry picking facts to make their case—spin.

The fact of the matter is that the F-35 was never intended to be an air superiority fighter—hence it’s called the Joint Strike Fighter. Back about 10 years ago, the U.S. Air Force narrative was that the Lockheed Martin F-22 Raptor was absolutely vital to national security because the F-35 couldn’t handle enemy fighters or take on the most advanced integrated air defense systems like the Russian S-400. The service changed its story once the Raptor program was terminated.

Since the termination of the Raptor production line, the Air Force has tried to cast the F-35 as an all purpose miracle plane that can do every mission as well as any purpose built platform. Look no further than the battle over its plans to retire the A-10. Lockheed has only poured fuel onto the fire. The company has repeatedly made assertions about the F-35’s performance that have later proven to be false. One example I can cite immediately is when Lockheed test pilot Billie Flynn told me how a fully laden F-35 has better high AOA performance and acceleration than all comers save for the F-22. The test report that David Axe managed to obtain clearly shows Flynn’s assertions to be false.

It’s true that the F-35 test article used in the test flight didn’t have stealth coatings or a full suite of avionics. But it’s also irrelevant in a visual range engagement. Lockheed and the JPO failed to mention that U.S. F-35s (UK F-35s will carry the ASRAAM internally) do not carry high off-boresight AIM-9X missiles while in a stealthy buttoned up configuration. Thus the lack of a helmet-mounted display was not a factor. Further, if the jet were carrying the AIM-9X, it would have to so externally—negating its stealth entirely, thus the lack of coatings is another red herring.

That being said, aerodynamic performance is not everything—avionics and stealth matter. While the F-35 is not the all singing, all dancing second coming that Lockheed and the JPO would have you believe that it is, they are correct that the JSF’s strengths lie in its stealth, sensors and networking.

While the F-35 does not have the sheer kinematic performance to lob the AIM-120 AMRAAM as far as the Raptor or F-15C can, it can likely approach to within launch range of an enemy aircraft undetected and get the first shot. Of course, the AMRAAM is dated technology and is quite vulnerable to digital radio frequency memory jammers, but the U.S. is certain to eventually develop a new air-to-air missile to replace it. Until the U.S. develops a new missile, the four AMRAAMs carried onboard a fully air-to-air configured F-35 may not be sufficient, but given the infrequency of air combat, it’s not likely to be a fatal flaw.

Further, with its networking abilities, groups of F-35s can coordinate their tactics and share data—which is a huge advantage. Combined with superior American pilot training, tactics and support platforms like the AWACS—the Pentagon’s real advantage—the F-35 is probably adequate to take on most comers. That includes the best Russia and China can offer. The Russian and Chinese aircraft will almost certainly offer grossly superior kinematic performance, but ultimately will probably fall short on stealth, sensors and networking—which are probably better metrics in today’s battlespace.

As I said at the beginning of the article, until operational F-35s face-off against a properly trained and equipped enemy flying some of these advanced foreign jets, we simply don’t know how it will fare. Let’s just hope we don’t have to find out.