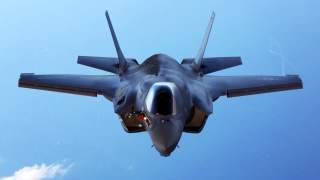 With the United States and North Korea continuing their standoff over Pyongyang’s arsenal of ballistic missiles and nuclear weapons program, the threat of war looms on the Korean peninsula.

Indeed, if there is a war with North Korea, it is likely to be one of the most savage conflicts in the history of war—with nuclear, chemical and potentially even biological weapons being unleashed. As such, U.S. forces in the region have to be ready to fight in contaminated areas. To prepare for such an eventuality, U.S. Marines from Marine Fighter Attack Squadron-121, station at Iwakuni, Japan trained to refuel their Lockheed Martin F-35B Joint Strike Fighters while wearing Mission Oriented Protective Posture (MOPP) level four gear.

“It’s important to practice in MOPP gear because the Marines don’t get many opportunities to wear this on a daily basis, so in the instance where they do have to wear MOPP gear in a real-life scenario, it’s not going to be a shock or surprise to them of how they are going to operate,” Staff Sgt. Martin Aldrete, a maintenance controller with VMFA-121, said in a U.S. Pacific Command release.

Training while wearing the MOPP gear allows the Marines to launch and recover their F-35Bs while under attack from chemical and biological weapons or help to survive the fallout from a nuclear attack. It might be a skill that those troops could have to exercise in the real world soon if leaders in Washington don’t get a handle on the North Korean standoff.

As such, operating under fire from chemical weapons or having a nuclear weapon explode at some distance from the base is not an abstract concept. Tensions are high with North Korea and in the event of a war; Pyongyang might chose to launch its nuclear weapons. A large American air base is a logical target for a North Korean chemical or nuclear attack.

However, Defense Secretary Jim Mattis seems to believe that diplomacy can avert a potential war with North Korea. “There may be opportunity for talks, if they stop their shooting missiles, stop developing nukes, stop building more nukes, we can talk,” Mattis said en route to Colorado Springs, Colorado.

Mattis explained that the Trump Administration is focused on resolving the North Korea crisis peacefully. “We are being led right now, diplomatically,” Mattis said. “Everything we do is designed -- the sanctions, the United Nations Security Council, two resolutions -- unanimous resolutions, more economic sanctions, diplomatic persona non grata from a number of nations around the world; it's all designed to bring diplomatic and economic pressure on North Korea to change its course.”

But while the Trump Administration might hope that North Korea changes course, it is very unlikely that North Korea will ever give up its nuclear weapons. Pyongyang sees nuclear weapons as the ultimate guarantor of the Kim regime’s survival. Thus, especially after the United States helped to overthrow Libyan dictator Muammar Gaddafi in 2011 despite offering Libya security guarantees in exchange for giving up its program to develop weapons of mass destruction, North Korea is not likely to repeat that mistake.

Ultimately, the United States will likely have to accept a nuclear-armed North Korea and adopt a deterrence posture.