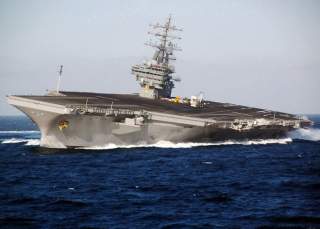 The U.S. Navy is struggling to meet its worldwide commitments with only ten aircraft carriers in the fleet. The service has been down to ten flattops ever since USS Enterprise (CVN-65) was retired in December 2012. The Navy will only return to eleven ships once USS Gerald R. Ford is commissioned in 2016, but that vessel won’t be ready for deployment until 2021.

But the law requires the Navy to operate a minimum of eleven carriers. The service is operating under a temporary exemption that allows it operate only ten vessels. But because the Navy is struggling to meet requirements with the current number of operational carriers, Congressman Mike Conaway (R-Texas) has introduced legislation to that would require the service to maintain a fleet of no less than twelve carriers.

The law used to require the Navy to operate twelve flattops until the last conventionally U.S. carrier USS Kitty Hawk (CV-63) was retired in 2009. If Conaway’s bill—which was introduced on July 21, just before the summer recess—eventually becomes law, the Navy would be required to maintain twelve carriers once the new USS John F. Kennedy (CVN-79) is commissioned in 2023.

“The USS John F. Kennedy (CVN-79) can be scheduled for completion in 2023, at which point the U.S. Navy will again have 12 operational aircraft carriers. The number of carriers mandated by Congress should match shipbuilding plans already in place in order to set the standard for the future,” Conaway said in an emailed statement. “Aircraft carriers form the backbone of the Fleet. I am proud to sponsor legislation that will ensure our Navy has the ships it needs to do its job, and I encourage my colleagues to show their support by cosponsoring this bill.”

Conaway timed the announcement of his bill with a House Armed Services Committee hearing on Nov. 3, when Rear Adm. Tom Moore, the Navy’s program executive officer for carriers, revealed that the Navy is struggling to meet its commitments with only ten carriers. Half the fleet is in maintenance while the remaining five vessels are being pushed to the breaking point. Moore attributed that to a ten-ship fleet and high “demand signal” from combatant commanders. “We’ve run the carriers harder than we’ve typically done and harder than they were designed,” Moore told the Congress.

The Navy hopes to alleviate the problem with its new Optimized Fleet Response Plan, limiting deployments to seven months, Vice Adm. John Aquilino, vice chief of naval operations for operations, plans and strategy told Congress. But until Ford is operational in 2021, the Navy is going to have a tough time, Sean Stackley, the service’s assistant secretary for research, development and acquisition told the committee.

For Conaway, that’s not acceptable. “Today, there is a gap in carrier presence in the Persian Gulf as the Iran nuclear deal goes into effect, and Navy acquisition chief Sean Stackley testified before a House Armed Services Subcommittee hearing today that gaps in presence will continue until 2021,” he stated. “Our adversaries threaten our freedom of the seas and doubt America’s military might.  Now is the time to show strength and resolve to both our military members and to the international community by raising the number of operational aircraft carriers so that the U.S. Navy can meet its commitments at home and abroad.”