America's Industrial Might is Working to End the Drone Threat 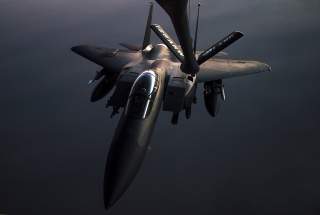 For more than two decades, the U.S. military owned the skies when it came to the employment of unmanned aerial systems (UAS) or drones. From the tiny, hand-launched Raven and Puma AE (All Environment) to the ubiquitous Predator and its armed cousin, the MQ-9 Reaper and the giant, high altitude RQ-4 Global Hawks, the U.S. developed and deployed an amazing array of UAS. The CIA and military have prosecuted the air campaign against al Qaeda and ISIS largely with armed drones. For a while the U.S. military seemed to have a franchise when it came to unmanned systems.

This time is over now. UAS are proliferating around the world. Our potential adversaries have “discovered” the value of unmanned systems. Russia has developed several families of military UAS, showcasing many of them in its wars in Ukraine and Syria. More significantly, Russia has demonstrated the ability to employ UAS-derived targeting to support devastating strikes by aircraft and artillery.

China too has been working since the early 2000s to develop and deploy military drones. It has also exported unarmed versions of some UAS to a number of countries in Asia and Africa. Iran has employed unmanned vehicles to support its forces in Iraq and to gather intelligence on U.S. forces operating in Southwest Asia. This week, a North Korean drone crashed south of the Demilitarized zone after overflying the newly-deployed missile defense site. Israel’s defense forces have shot down several drones operated by Hamas and Hezbollah.

ISIS has been among the most aggressive users of drones. ISIS’ drones are all commercially-available systems. Not only are the technologies carried by these drones continuing to improve dramatically, with cameras getting smaller while providing better images, but so are innovations to exploit these pictures. From the comfort of underground command centers, ISIS commanders are able to watch the movement of Iraqi and Kurdish forces in real time. For the first time in history, terrorist groups can operate their own air forces.

Countering hostile drones has become a priority for the U.S. military, particularly the Army and Marine Corps. The U.S. Army Chief of Staff General Mark A. Milley has made the rebuilding of his service’s short-range air defenses a priority to address low-flying aircraft and helicopters and to meet the growing UAS threat.

There are several challenges to overcome in the counter UAS mission. First, the drone must be detected and tracked. Because some of these threats are quite small, fly slowly and have few metal parts, this can be difficult. Second, the drone must be defeated. Though they can be shot down, this is not always the optimal course of action. In some circumstances, it makes more sense to jam the drone’s electronics either on-board guidance system or its connection to a remote control station. Third, the cost of defeating drones, particularly simple, commercial systems, must be proportional to the cost of the threat.

The response by industry and government laboratories to this urgent requirement for means of detecting and defeating hostile drones has been nothing short of remarkable. A number of companies have produced solutions to the UAS detection problem. For example, ELTA North America’s Drone Guard is a man-portable radar/optical sensing system that can detect even hovering quadrotors out farther than a kilometer. It can also use electronic warfare to jam the drone’s communications links. CACI’s Skytracker detects the radio signal used to control a drone and can thereby locate the system’s operator. Several private firms have developed acoustic sensors to track the quiet motors and blades of many UAS.

Various means have been developed to defeat a drone once it is detected. In theory, even a rifle or machine gun could down a drone, although the engagement parameters make this a lucky shot. Battelle’s DroneDefender is a rifle-like device that uses radio waves to jam the drone’s communications links which generally forces it to land.

Some firms use net firing devices that envelop the drone and bring it to the ground. The U.S. Army has contracted with SRC to build 15 ruggedized, mobile versions of its Silent Archer Counter-UAS System which uses multiple sensors to detect and track drones and then electronic warfare techniques to ground the target. Boeing and General Dynamics have deployed a drone-killing laser on a Stryker vehicle. Raytheon has modified its Stinger air defense missile to enable it to shoot down drones.

One of the most interesting counter drone solutions is provided by Sierra Nevada Corporation (SNC). A leader in the field of jamming improvised explosive devices, SNC applied its knowledge and experience of ground-level threats and focused them into the air. SNC’s SkyCAP system, a derivative of its currently operationally deployed, dismounted Advanced EW System – Modular (AEWS-M) based system, was successfully demonstrated in a series of government exercises. In essence, by changing the software, the same basic radio frequency device can defeat IEDs or UAS.

The UAS threat arose rapidly. Fortunately, the means to counter this new threat are moving ahead almost as fast. The U.S. military will have a wealth of options for dealing with UAS of various sizes, weights and ranges.