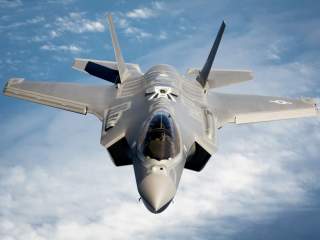 The Lockheed Martin F-35 Joint Strike Fighter and the Boeing F/A-18E/F Super Hornet are both American warplanes competing for orders on the international fighter market. While the F-35 represents a new generation of technology, not every nation can afford the stealthy fifth-generation fighter. Moreover, the United States might not always be willing to sell the F-35 to all of its allies and partners. That represents an opportunity for Boeing’s F/A-18E/F Super Hornet.

In the Middle East, the two most immediate potential Super Hornet customers are Qatar and Kuwait. Qatar could end up buying as many as seventy-three jets—but Doha seems more interested in Boeing’s F-15E Strike Eagle. That leaves Kuwait, which is on track to buy twenty-eight new Super Hornets to replace its current fleet of classic model F/A-18s for about $3 billion. Though progress on the deal has been slowed by the U.S. government’s export control process, industry officials expect that it will ultimately proceed.

“The Super Hornet is one of the best solutions for us,” Abdullah Al Foudary, commander of the Kuwait Air Force, told Reuters at an industry event in Bahrain in late January. "We have the legacy F-18s that we have to find a solution for in 2030-2040."

Meanwhile, Boeing is aggressively courting New Delhi and has even offered to manufacture the Super Hornet in India. “We see Super Hornet as an opportunity to do that to tie directly into the ‘Make in India’ strategy,” Dennis Muilenburg, president and CEO of Boeing, told the Hindu Times in an interview last week. “I would not say there is an official offer. This is a conversation we are having with interested parties right now.”

Muilenburg, also suggested that Boeing might share its fifth-generation fighter technology with India. Boeing developed the majority of the Lockheed Martin F-22 Raptor’s sensor fusion technology and avionics. “We (Boeing and Lockheed Martin) jointly develop the F-22 Raptor. Subject to all government-to-government agreements, that is an area of future investment for which we are interested in,” Muilenburg said. As a Boeing spokesperson later clarified, Muilenburg did not offer to sell the out-of-production F-22 Raptor—which is subject to an export ban under U.S. law.

Other than Kuwait or India, there are a host of nations that might be potential customers for the F/A-18E/F. The United States is unlikely to be willing to export the stealthy F-35 to Middle Eastern states in the near term due to regional security concerns. But those allies and partners will, nonetheless, need advanced combat aircraft to counter threats from Iran and others. There are also other countries like Canada and Malaysia who could end up opting for the Super Hornet.

Ultimately, however, the market potential for the Super Hornet is limited. While, the Pentagon is likely to continue buying F/A-18E/F strike fighters for the U.S. Navy for some time yet, eventually the domestic demand for the advanced fourth generation jet will inevitably dry up. In time, the F-35 is almost certainly going to become the dominant platform on the international market, thus the window for Boeing is short.