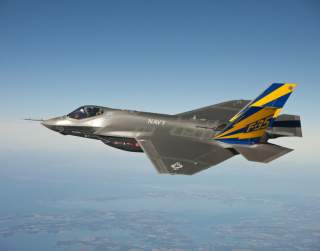 The U.S. Navy is continuing to buy the Boeing F/A-18E/F Super Hornet at reduced rates while increasing its buy of Lockheed Martin F-35C Joint Strike Fighters. However, the sea service has always been somewhat lukewarm toward the stealthy single-engine fighter. Instead, the service has shown a strong preference for more Super Hornets, while either developing a stealthy long-range unmanned strike aircraft or skipping ahead to a next-generation F/A-XX. But the Office of the Secretary had other ideas.

Right now, the plan is for the Navy to keep buying some number of Super Hornets while buying F-35Cs to give the carrier air wing some stealth capability. Meanwhile, the Navy has started work on the next-generation F/A-XX—but the Unmanned Carrier Launched Surveillance and Strike program has been renamed the MQ-XX Stingray and de-scoped into a robotic aerial-refueler. But is that the best plan for the Navy?

There is an argument to be made for building upgraded Block III Super Hornets with reduced radar cross-section and other enhancements. Indeed, Boeing has already demonstrated many of those upgrades—including a new external podded-weapons bay, conformal fuel tanks, new cockpit information systems and RCS reduction measures. Other proposed upgrades would add more powerful and fuel-efficient engines and vastly improved electronic warfare capabilities. Once developed to its full potential, the Block III Super Hornet could perform most of the missions envisioned for the F-35C except penetrating strike—it would have to rely on stand-off weapons for that mission.

The money saved from truncating the F-35C buy could be reinvested into the F/A-XX and a new long-range unmanned strike platform. Arguably, such a platform would be much more useful to the Navy than a new short-range tactical fighter. Given the reach of new Chinese anti-ship ballistic missiles, the Navy may have to stand a carrier as much as 1000 nautical miles offshore in order to ensure that the giant 100,000-ton, $13 billion warships are not directly threatened. That in turn will mean that the Navy needs a longer-range air wing—the F-35C and the F/A-18 won’t cut it.

In the short-term, there is not much that can be done to address the issue. It takes roughly fifteen years to develop a new aircraft if everything goes smoothly. But the problem will have to be addressed eventually—one way or the other. The solution is to start doing something to address the problem now by taking corrective action immediately.

That solution is to buy more advanced Super Hornets and its electronic attack variant in the form of the EA-18G Growler while investing in a stealthy new unmanned strike aircraft and a future F/A-XX. To pay for those programs, the Navy could cancel its portion of the F-35 buy and reinvest the money. The Navy would have to accept some risks, but the long-term payoff could save the carrier from obsolescence in the era of precision-guided warfare.

Dave Majumdar is Defense Editor of The National Interest.