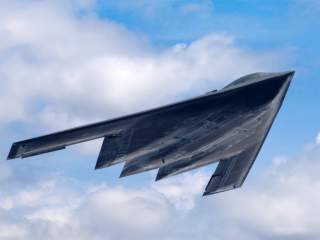 With the U.S. Air Force revealing concept art and a designation for its shadowy Northrop Grumman B-21 Long Range Strike-Bomber (LRS-B) last week, there are many details that we can now glean about the new warplane.

First and foremost, the new B-21 looks very similar to its B-2 Spirit predecessor. In fact, the new aircraft look startlingly similar to the original Advanced Strategic Penetration Aircraft (ASPA) and the later Advanced Technology Bomber concept from the 1980s that ultimately resulted in the B-2. But the Spirit was redesigned late in the game to operate at low altitudes after Dr. Paul Kaminski’s—current chairman of the Defense Science Board—Red Team cautioned that the B-2 might have to resort to low-level penetration as the Soviets built new, more capable radars—as legendary Aviation Week journalist Bill Sweetman points out in his book “Inside the Stealth Bomber.” The redesign caused a decrease in range and payload, as well as a larger radar cross-section.

If the current B-21 design is truly representative of the direction the Air Force is taking, the new aircraft will take the B-2’s all-aspect stealth design to the next level. Particularly, the B-21’s low observable design will be more effective against low frequency radars operating in the UHF and VHF bands, which are increasingly coming into vogue as a means to counter stealth aircraft. Indeed, as then Air Force chief of staff Gen. Norton Schwartz told the House Armed Services Committee in 2012, even the B-2 is starting to lose its ability penetrate hostile airspace. “The technology on which they were designed with respect to signature management . . . is ‘80s vintage,” Schwartz told the committee, adding, “the reality is that the B-2 over time is going to become less survivable in contested airspace.”

The B-21 design—which is similar to the original high-attitude optimized B-2 design—is built to counter the low frequency radars that can detect and track tactical fighter-sized stealth aircraft. Unlike an F-22 or F-35, which are designed to operate in an environment where the enemy might be aware of their presence, the B-2 and B-21 are designed to avoid detection altogether. Basically, the B-21 (and B-2 to an extent)—with its large flying-wing design—reduces its low frequency radar cross-section to the point where it blends in with the background noise inherent to those UHF/VHF band systems. That’s similar in concept to how a submarine hides in the background noise of the ocean. But—like all stealth aircraft—it will not be invisible. Stealth is not a cloak of invisibility, after all. Stealth technology simply delays detection and tracking.

While the Air Force’s rendering of the B-21 gives us some clues as to the configuration of the new aircraft, most of its other parameters remain unknown. The B-21’s size and payload will largely be determined by whatever propulsion system is readily available to power it. Given that the LRS-B is slated to enter into service in the mid-2020s, the aircraft will necessarily have to use an existing engine design. Moreover, that engine must have a profile conducive to a stealth aircraft.

That would almost certainly rule out a commercial airliner engine derivative with a large bypass—such an engine would have an extremely large diameter even if it is highly efficient.

A more likely choice is a derivative of an existing military engine that is already in production. Possible choices could include unaugmented derivatives of the F-15 and F-16’s Pratt & Whitney F100 or General Electric F110. The F110, though an aged design, would give the LRS-B commonality with the Rockwell International B-1 Lancer and Northrop B-2 Spirit, both of which use engines from the same lineage. The B-1’s F101 was derived into the F110, which in turn was derived into the B-2’s F118 motors.

An F110 derivative does have its advantages, but the most likely candidate to power the LRS-B is an unaugmented version of the Pratt & Whitney F135, which in its current state offers roughly 28,000lbs of dry thrust. With some tweaks, such as an increased bypass ratio, a version of the F135 could probably produce more than 30,000lbs of thrust while potentially increasing fuel efficiency. With two such engines, an LRS-B would have less than the roughly 70,000lbs of thrust available to the B-2, but there are indications that the B-21 is smaller than the Spirit.

While the LRS-B might be provisioned to accommodate whatever engine ultimately comes to fruition from the Air Force’s adaptive-cycle engine program—variously called ADVENT, AETD and AETP—if the service is serious about an initial operational capability date around 2025, the new bomber will necessarily use an existing propulsion plant. It takes a long time and large sums of money to develop a new turbine engine. It’s also not an endeavor without risk—look no further than China’s frustrated efforts to develop an indigenous jet engine.

If one accepts the premise that the B-21 will be powered by twin unaugmented F135 engines, one can then assume that the new bomber will be larger than a Boeing F-15E Strike Eagle or General Dynamics F-111 but smaller than the B-1 or B-2. Given the types of threats from low frequency radars that are projected to be out there in the future and the limitations of current low observables materials, B-21’s subsonic flying wing design will be large enough to counter low frequency radars.

A tactical fighter-sized stealth aircraft must be optimized to defeat higher-frequency bands such the C, X and Ku bands as a simple matter of physics, but a strategic bomber like the B-2 or LRS-B can be larger to counter lower frequency radars. There is a “step change” in a stealth aircraft’s signature once the frequency wavelength exceeds a certain threshold and causes a resonant effect. Typically, that resonance occurs when a feature on an aircraft—such as a tail-fin—is less than eight times the size of a particular frequency wavelength. That means a bomber like the B-21 has to have allowances for two feet or more of radar absorbent material coatings on every surface or the designers are forced to make trades as to which frequency bands they optimize the aircraft to operate in. As such, to defeat low frequency radars operating in the L, UHF and potentially the VHF bands (this is easier said than done—and could in fact be impossible), a flying wing design is in effect, mandatory.

There are also indications that the Air Force is planning on building significant electronic attack capability into the B-21 airframe (and the LRS family). Electronic attack capability is necessary to counter low frequency radars operating in the VHF band, which are nearly impossible to defeat with airframe shape and low observable materials alone. The fact is that despite the Air Force’s public narrative that aircraft like the F-35 can go into a high threat zone alone and unafraid, the service’s own experts at the Air Force Warfare Center recognize the value of jamming. Stealth and electronic attack always have a synergistic relationship because detection is about the signal to noise ratio. Low observables reduce the signal, while electronic attack increases the noise.

“An improvement would be to include that presumably these platforms would be used in coordination with other platforms and weaponry so as to increase the noise from which to hide within,” one Air Force official with stealth aircraft experience told me. “Who wants to sort through a pile of hay for a needle when there are plenty of obvious needles that one should concern themselves with outside of the haystack?”

If the LRS-B is somewhat smaller than the B-2, the designers have to pick between range and payload. Former Air Combat Command commander Gen. William Fraser, a former B-52 pilot, told me few years ago when the program was in its infancy that  “a combat radius of between 2,000 and 2,500 nautical miles is sufficient, which equals a 4,000-5,000 nautical mile range. All points on earth are within about 1,800 nautical miles from the closest body of water.” Thus, one can assume that the LRS-B will have at least that much range with whatever space leftover being dedicated to its payload. The LRS-B doesn’t necessarily need to carry the same amount of weaponry as the B-2, it just needs to carry the biggest available weapon—maybe just one GBU-57A/B Massive Ordnance Penetrator (MOP) instead of two.

In terms of avionics, the Air Force appears to be doing something smart. The aircraft will apparently use an open architecture computer system, which means that the LRS-B won’t be hamstrung with antiquated avionics and ponderous processes to integrate new weapons and hardware—like what happened with the Lockheed Martin F-22, for example. The aircraft will also be nuclear-capable from the get go, though it won’t be certified to perform that mission until later. That’s not surprising—and had been reported as early as 2011 during Gen. Norton Schwartz’s tenure as Air Force chief of staff. The service also plans for the LRS-B to be optionally manned, however the chances of operating a $550 million aircraft without a pilot onboard are laughably small.