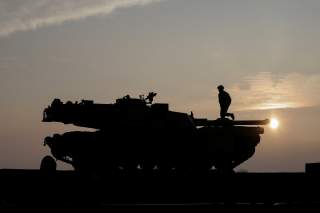 The announcement was cryptic, even garbled. On the federal government's contracts-awarded site was an item: defense firm General Dynamics had been awarded a $9.9 million addition to a previous contract.

The literal words of the announcement were that General Dynamics will “support and [sic] urgent material release and have first unit equipped on trophy installed on an Armor Brigade Combat Team’s M1A2 SEPv2.”

The language may have been worthy of Yoda, but its significance was real. The U.S. military is finally equipping its armored vehicles with defenses against anti-tank weapons.

What the announcement seemed to be saying was that General Dynamics is responding to an urgent Army need to install Israel's Trophy active protection system, or APS, on M1A2 Abrams tanks. It’s not clear how many tanks will be equipped with Trophy. However, the announcement did say that the money would come from research and development funds, and that the work would be completed by March 2019.

General Dynamics referred all queries from the National Interest to the U.S. Army’s Program Executive Office for Ground Combat Vehicles (PEO GCV). PEO GCV merely said that “we have prepositioned contracts to enable the Army to pursue multiple options depending upon pending decisions by senior Army leadership.”

Fitting Trophy to American tanks would be the first time the defense system has been used outside of Israel, which uses Trophy to protect vehicles such as the Merkava IV tank. Trophy, made by Israeli firm Rafael which has partnered with General Dynamics, uses radar to detect incoming anti-tank projectiles and then fires a barrage of shotgun-like pellets to stop them.

Israeli media highlighted the U.S. Army announcement. And interestingly, so did Russia, which also uses APS equipment, such as the Afganit defense system on its new T-14 Armata tank. Sputnik News could not resist saying that anti-tank weapons such as the Russian-made RPG “have been a perennial thorn in the side of the US military and its allies. A $2,000 RPG launcher firing a $500 grenade can destroy or disable a $9 million Abrams tank.”

The Russian publication cited media reports that each Trophy system costs $350,000. “The U.S. Army presently deploys almost 1,200 M1A2s,” Sputnik News pointedly added. “Should the Trophy system be added to every single one, this would come out to an expense of about $420 million.”

In addition to the Trophy APS, the Army is also evaluating the Iron Fist, made by Israel Military Industries, and Iron Curtain, made by U.S. firm Artis. Last month, Britain announced that it had commissioned Italian defense contractor Leonardo to design an APS system for British armored vehicles.

Image: US soldiers prepare a M1 Abrams tank to offload from a train at the Mihail Kogalniceanu Air Base, Romania, February 14, 2017. Inquam Photos/Octav Ganea/via REUTERS