America's M1 Abrams Tanks are Getting a Big Upgrade: 'Shields' 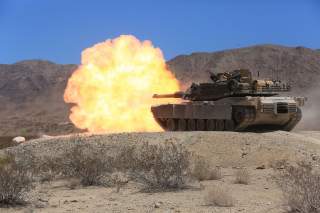 The Army has purchased an emerging technology for Abrams tanks, Bradleys and Strykers designed to give combat vehicles an opportunity identify, track and destroy approaching enemy rocket-propelled grenades in a matter of milliseconds, service officials said.

Army has purchased a number of Trophy APS systems, and a number of another kind of system as well, to evaluate them, including one called "Iron Fist," also from Israel, and another from a U.S.-based manufacturer called "Iron Curtain," service statements said.

The Army aims to put Iron Curtain on a Stryker, Iron Fist on a Bradley, and Trophy on an Abrams tank, to evaluate their effectiveness.

"The one that is farthest along in terms of installing it is ... Trophy on Abrams," Lt. Gen. John Murray, Deputy Chief of Staff, Army G-8, said in a written statement. "We're getting some pretty ... good results. It adds to the protection level of the tank. Trophy has an interesting capability, slew to cue. We're finding that we can incorporate that into the installation on the Abrams."

Iron Fist on the Bradley is also "moving along," Murray said. The service is working on installing the system on the Bradley - considering to the size, weight, and power requirements of the system and the amount of space available on top of the turret of the vehicle.

APS systems, he said come with additional considerations. In particular, he said, are considerations for the safety of Soldiers alongside the vehicles who are dismounted.

"As we do this, the interesting thing is going to be safety concerns," Murray said. "Anything that shoots off an armored vehicle, 'x' amount of meters, and makes something blow up, is not good for the integrated dismounted/mounted operations. So we have some concerns about tactics, techniques, and procedures and how we adjust those."

Peck said General Dynamics is testing Trophy on the Abrams tank this year.

Being engineered as among the most survivable and heavily armored vehicles in existence, the Abrams tank is built to withstand a high degree of enemy fire, such some enemy tank rounds, RPGs, rockets and missiles. Abrams tanks can also carry reactive armor, material used to explode incoming enemy fire in a matter that protects the chassis and crew of the vehicle itself.

However, depending upon the range, speed and impact location of enemy fire, there are some weapons which still pose a substantial threat to Abrams tanks. Therefore, having an APS system which could knock out enemy rounds before they hit the tank, without question, adds an additional layer of protection for the tank and crew. A particular threat area for Abrams tanks is the need the possibility of having enemy rounds hit its ammunition compartment, thereby causing a damaging secondary explosion.

APS on Abrams tanks, quite naturally, is the kind of protective technology which could help US Army tanks in tank-on-tank mechanized warfare against near-peer adversary tanks, such as a high-tech Russian T-14 Armata tank. According to a report in The National Interest from Dave Majumdar (Click Here for Story), Russian T-14s are engineered with an unmanned turret, reactive armor and Active Protection Systems.

“Dozens of threats were launched at these platforms, many of which would have been lethal to these vehicles. Trophy engaged those threats and defeated them in all cases with no collateral injury and no danger to the dismounts and no false engagement,” the DRS developer said.

“Trophy will not only knock an RPG out of the sky but it will also calculate the shooter’s location. It will enable what we call slew-to-cue. At the same time that the system is defeating the threat that is coming at it, it will enable the main gun or sensor or weapons station to vector with sights to where the threat came from and engage, identify or call in fire. At very least you will get an early warning to enable you to take some kind of action,” the DRS official explained. “I am no longer on the defensive with Trophy. Israeli commanders will tell you ‘I am taking the fight to the enemy.’