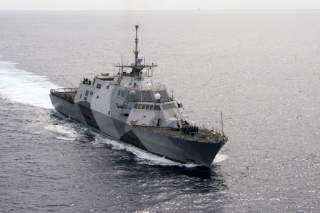 The U.S. Navy appears to have a new low-cost plan to counter Iran’s fleet of speedboats.

As part of its asymmetric naval doctrine, Iran has amassed a fleet of Fast Inshore Attack Craft (FIAC) and speedboats equipped with anti-ship cruise missiles. The strategy aims to overwhelm U.S. warships operating in the Persian Gulf through the use of swarm tactics.

All signs suggest that this strategy could be highly efficient for Iran. As Brett Davis has recounted on the Center for International Maritime Security blog:

In 2002, a joint war game exercise, known as Millennium Challenge 2002 (MC02), took place to gauge readiness in the event of a conflict with a hostile Middle Eastern nation. The results were disastrous for the U.S., with over a dozen ships destroyed and thousands killed or wounded as a result of asymmetric and unconventional naval warfare. 14 years later, Iranian asymmetrical warfare can still have a devastating effect on U.S. and allied forces in the Middle East.

The United States has thus been at pains trying to devise an effective strategy to deal with Iran’s swarm tactics. One aspect of the problem is that using Tomahawk or Harpoon missiles could prove awfully expensive as these missiles cost millions of dollars, far more than the Iranian speedboats.

As such, one possible solution the U.S. Navy has trumpeted in recent years is the use of lasers or kinetic-energy weapons. Indeed, it is notable that the first ship to carry laser weapons, the USS Ponce, is deployed in the Middle East.

Unlike most missiles, lasers are extremely cheap, costing only a few cents to fire. Moreover, whereas only a finite number of missiles can be carried on a ship, lasers give U.S. naval vessels a near infinite amount of ammunition. This is particularly important when dealing with the threat of a swarm of Iranian speedboats.

Lasers are not the only potential solution to the Iranian speedboat problem that the U.S. Navy is contemplating, however. One other venture is integrating the Longbow Hellfire missile system, designated as the Surface-to-Surface Missile Module (SSMM), onto America’s Littoral Combat Ships.

In that vein, the U.S. Navy recently announced the first test of the Longbow Hellfire missile system from a Littoral Combat Ship. The tests, which were announced at the end of last month, took place in mid-June, according to a Navy press release.

“During the mid-June tests off the coast of Virginia, the modified Longbow Hellfire missiles successfully destroyed a series of maneuvering small boat targets. The system 'hit' seven of eight targets engaged, with the lone miss attributed to a target issue not related to the missile's capability,” the press release said.

The Navy also explained in the statement that the test was designed to simulate engaging numerous fast-attack speedboats like the ones used by Iran. “Termed Guided Test Vehicle-1, the event was designed to specifically test the Longbow Hellfire launcher, the missile, and its seeker versus high speed maneuvering surface targets (HSMSTs). The HSMSTs served as surrogates for fast inshore attack craft that are a potential threat to Navy ships worldwide.”

As Motley Fool explained following the test, “Each Hellfire has a five-mile range, and will be self-guiding (i.e., 'fire-and-forget'). Once a threat is detected by shipboard or airborne radars, a Hellfire can be launched to destroy the target.”

“We have these 10,000 [Longbow] missiles, there’s no cost risk at all, it’s vertically launchable and you can shoot lots of them at same time and you don’t have to do that thing where you keep the laser on it,” Ailes said USNI News reported. That will be crucial in dealing with the Iranian speedboat threat.

The Navy press release from last month also emphasized this point, stating: “Integration of the ‘fire-and-forget’ Longbow Hellfire missile on LCS represents the next evolution in capability being developed for inclusion in the Increment 3 version of the surface warfare mission package for LCS. When fully integrated and tested, each 24-shot missile module will bring added firepower to complement the LCS's existing 57mm gun, SEARAM missiles and armed MH-60 Sea Hawk helicopter”

The SSMM will be fully integrated and deployed on the LCS starting in 2017.