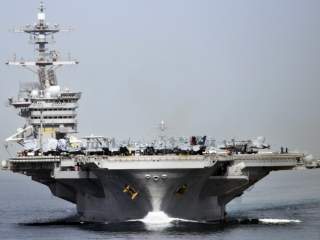 Anyone who has been watching the United States try to pull off its much discussed “pivot” or “rebalance” to Asia knows one thing: The challenges of the day, from Russian moves in Eastern Europe and Syria to the threat of ISIS—or even just the steady stream of non-Asia-Pacific problems—always seem to get in the way. However, we must give President Obama credit where credit is due. U.S. relations with India, which shares a common challenge with America in a rising China, have warmed considerably. While certainly not a full-blown alliance, relations have grown to such an extent that U.S. defense officials seem willing to share some of their most prized military technologies with the rising South Asian powerhouse. Indeed, the United States seems ready to share the very symbol of American power projection: the mighty aircraft carrier.

A report from Reuters notes that Washington and New Delhi are discussing options for the joint development of an aircraft carrier for India. In a recent visit to India, Chief of U.S. Naval Operations, John Richardson, remarked that “we are making very good progress, I am very pleased with the progress to date and optimistic we can do more in the future. That's on a very solid track.”

Richardson, according to the Reuters report, revealed that one of the crown jewels of American carrier technology—highly coveted electromagnetic launch technology that allows heavier planes to take off from the carrier flight deck—was part of the talks. Richardson offered that “all of those things are on the table, there are possibilities, it’s a matter of pacing, it's very new technology for us."

Considering how difficult it is to build an aircraft carrier—for example, China began in-depth, first-hand analysis of scraped aircraft carriers it purchased back in 1985, taking until 2012 to commission a small rebuilt ex-Soviet carrier—this is nothing short of a coup for India. Up until this point, New Delhi’s best options were, shall we say, less than desirable Russian technology. As frequent National Interest contributor Kyle Mizokami points out:

“In the early 2000s, India faced a dilemma. The Indian navy’s only carrier INS Viraat was set to retire in 2007. . . India’s options were limited. The only countries building carriers at the time—the United States, France and Italy—were building ships too big for India’s checkbook. In 2004, India and Russia struck a deal in which India would receive Admiral Gorshkov. The ship herself would be free, but India would pay $974 million dollars to Russia to upgrade her.

“It was an ambitious project. At 44,500 tons, Admiral Gorshkov was a huge ship. Already more than a decade old, she had spent eight years languishing in mothballs. Indifference and Russia’s harsh winters are unkind to idle ships.”

“In 2007, just a year before delivery, it became clear that Russia’s Sevmash shipyard couldn’t meet the ambitious deadline. Even worse, the yard demanded more than twice as much money—$2.9 billion in total—to complete the job.

“The cost of sea trials alone, originally $27 million, ballooned to a fantastic $550 million.

“A year later, with the project still in disarray, Sevmash estimated the carrier to be only 49-percent complete. Even more galling, one Sevmash executive suggested that India should pay an additional $2 billion, citing a “market price” of a brand-new carrier at “between $3 billion and $4 billion.”

“The ship’s boilers, which provide Vikramaditya [the Indian rechristened for Admiral Gorshkov] with power and propulsion, are a long-term concern. All eight boilers are new. But yard workers discovered defects in them. During her trip from Russia to India, the flattop suffered a boiler breakdown, which Sevmash chalked up to poor-quality Chinese firebricks.”

Clearly India, now able to ‘pivot’ away from Russia’s carrier problems, stands to benefit dramatically in this new partnership with America.

Reuters also noted that a joint working group is set to meet in New Delhi in the coming weeks as part of a sustained effort to establish strong cooperation on the design, development and production of a proposed Indian carrier. My question is this: Would America also be willing to sell to its new South Asian partner the carrier-based version of the F-35? Considering rumors a few years back concerning a possible F-35 purchase by New Delhi, you have to wonder. If China keeps pushing its weight around in the wider Indo-Pacific region, one can’t dismiss how far this partnership could really go.

Harry Kazianis (@grecianformula) is the former Executive Editor of The National Interest. Kazianis presently serves as Senior Fellow (non-resident) for Defense Policy at the Center for the National Interest as well as a Fellow for National Security Affairs at The Potomac Foundation. All opinions are his own.