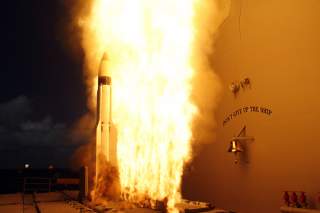 On the morning of January 31, 2018, an Aegis Ashore missile battery based in Kauai, Hawaii cued onto an approaching intermediate-range ballistic missile (IRBM). The installation launched an SM-3 Block IIA missile to intercept the IRBM at speeds over fifteen times the speed of sound.

The Standard Missile 3 Block IIA was devised to allow U.S. Navy destroyers and cruisers to shoot down short- to intermediate-range ballistic missiles at ranges of up to 1,350 miles while they are soaring above the Earth’s atmosphere in their midcourse phase. According to the Missile Defense Agency, this marked the first occasion in which the missile was launched from a land-based Aegis Ashore battery, and the first time it used both space- and land-based sensors to cue the intercept.

However, the MDA was also obliged to report that the SM-3 failed to hit the oncoming target—the second failure in a row out of three Block IIA tests conducted since February 2017.

Fortunately, of course, this was a test, and not a real attack by a ballistic missile with a nuclear warhead. It posed no more threat than the false missile alert in Hawaii on January 13 triggered by a confused employee.

An MDA statement explained that despite being “disappointed” by the result, the test had still provided useful data for improving the effectiveness of the system and “demonstrated an increase in the effective range of the overall Ballistic Missile Defense System.”

As it stands, both the SM-3 and THAAD ballistic-missile defense systems, as well as Patriot PAC-3 surface-to-air missiles, are already actively deployed to defend South Korea, Japan and U.S. islands in the Pacific from North Korean missile attack.

While the MDA has yet to release details as to what caused latest failure, annual reports released in January (prior to the latest test) by the Pentagon’s Department of Testing & Evaluation reveal that it has “decreased confidence” in the reliability of the Block IIA missiles, while even the more favorably tested THAAD system is showing “worsened deficiencies” in operator training and system reliability.

Not all of the news in the DOT&E reports is negative. Notably, the testing department states that the Ground-based Midcourse Defense system “has demonstrated the capability” to defend the entire continental United States from longer-range and harder-to-hit Intercontinental Ballistic Missiles (ICBMs)—at least from a limited attack using less sophisticated types of such weapons. Though the GMD has a slightly spottier testing record than the SM-3 series, a successful test interception of an ICBM target in July 2017 has increased confidence that it would actually work.

Note, however, that GMD has yet to be tested against a “complex” ballistic target that deploys decoys and/or multiple warheads to confuse and overwhelm defensive missiles. Most experts believe that any country capable of developing an ICBM in the first place will also have the capacity to eventually develop the technology for complex missiles.

Fortunately, both THAAD and the Aegis system were tested against complex medium- and intermediate-range missiles in 2017, and targeting radars successfully discriminated between real reentry vehicles and decoys.

However, two of the four successful tests performed by the Aegis involved terminal-phase interceptions of ballistic missiles by SM-6 Dual missiles, which have much shorter range and are currently only deployed onboard ships at sea. While they will provide vital terminal-phase defense for naval forces and are effective in antiaircraft and even ground-attack roles, they have limited applicability to regional defense against ballistic missiles.

The other two successful tests included interceptions by a Block IIA on February 2017 (which you can see in this video) and a “Threat Update” version of an earlier Block IB–model missile in October.

It is on the Block IIA that both the United States and Japan are placing their bets for regional missile defense of the Pacific. Indeed, Tokyo recently purchased four more of the missiles at a cost of $33 million each, and plans on installing two Aegis Ashore batteries on Japanese soil by 2023 at a cost of well over $2 billion dollars. Already, four Japanese destroyers deploy the SM-3 missile, with four more on the way. Eight U.S. Navy destroyers are also outfitted for long-range ballistic-missile defense—though two of the destroyers are currently out of commission, due to collisions with commercial shipping which occurred in the summer of 2017.

The Pentagon’s testing agency “has lower confidence in SM-3 missile reliability due to recent in-flight failures, coupled with MDA shortfalls in simulating the in-flight environment in its SM-3 ground test program, addressing failures and anomalies identified during flight testing, and implementing a rigorous configuration management and control process for SM-3 production.”

The report details software flaws that could cause failed interception, as well as dissatisfaction with the testing of the system’s resilience to electromagnetic interference. However, as the recent false alarm in Hawaii vividly demonstrated, humans can be even more prone to mistakes than advanced technology. The second to last SM-3 test failed when a sailor accidentally identified the ballistic target as a “friendly,” causing the interceptor to self-destruct. The evaluating report dryly notes this reflects a “deficiency that allows an operator to break a ballistic missile engagement with a push of a button, without having to confirm action.”

There is some good news for Aegis Ashore: recent exercises have successfully demonstrated the system’s capability of networking with friendly sensor platforms, including those of NATO allies. Furthermore, the SM-6 and older SM-2 Block IV missiles are deemed to have proven “reliable” as terminal missile-defense systems.

The Army’s THAAD system is designed to protect a smaller hundred-mile radius from attack by ramming short- to intermediate-range missiles as they begin plunging down towards their target in their terminal phase. Currently, the system has been deployed to South Korea, Guam and Hawaii. THAAD has a more consistent success record in tests, and in 2017 continued that streak with two more successful intercepts in 2017, including one against an MRBM that deployed decoys.

However, the evaluation department is again concerned about the human element, judging that “THAAD training and documentation deficiencies worsened in FY17.” It specifies that current THAAD courses “provide insufficient time to effectively train operators for their missions, and the operators often encounter software mismatches between institutional training and operational environments.” Part of the problem is reportedly that upgrades to the THAAD hardware, software and operational procedures are not being reflected with updates to the documentation and training simulators.

THAAD systems also continue to suffer power failures in their three-kilowatt generators, and breakdowns in their radar’s cooling systems.

More generally, the Pentagon testers are worried that the entire Ballistic Missile Defense System, including its numerous radars, is deficient in cybersecurity and recommends much more comprehensive testing of the system’s vulnerability to cyber and electronic-warfare attacks.

Overall, the United States’ ballistic-missile defenses remain a work in progress. The testing reports describe promising results from live-fire tests of more sophisticated ballistic-missile targets employing decoys. However, a key component of the system—the SM-3 Block IIA missile—has had a rough year, even as it stands to become the linchpin of Japan’s home island defenses.

It is important for national leaders to recognize that ballistic-missile defenses can only mitigate the risk of a limited nuclear missile strike, not grant a perfectly reliable shield against one. After all, long-range ballistic-missile defenses have never been tested in combat conditions—a state of affairs that even the testers at the Pentagon surely hope will not change any time soon.