America's Missile Defenses At Sea Are Getting a Big Upgrade 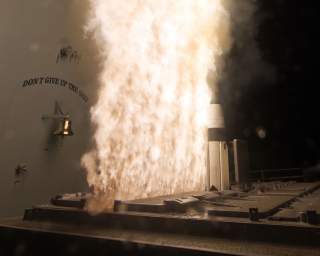 According to Naval Sea Systems Command (NAVSEA), the AMDR performed exactly as expected during the September 7 test event, which was designated Vigilant Talon. During the test, at 13:38 local time— or 19:38 Eastern Daylight Time—the Navy simultaneously launched a short-range ballistic missile target and multiple air-to-surface cruise missile targets off the west coast of Hawaii to put the new radar though its paces. The AN/SPY-6(V) searched for, detected and maintained track on all targets throughout their trajectories, according to NAVSEA. It was the third ballistic missile defense test for the new radar.

"AMDR is successfully demonstrating performance in a series of increasingly difficult test events and is on track to deliver advanced capability to the Navy's first Flight III Destroyer."

According to NAVSEA, the Navy’s test successfully met its “primary objectives” against a “complex short range ballistic missile” and “multiple air-to-surface cruise missile” targets simultaneously based on preliminary data. NAVSEA will have to take a more detailed look at the data to fully evaluate the SPY-6 radar’s performance based upon telemetry and other data obtained during the test.

With its Gallium Nitride technology, the SPY-6 is roughly 30 times more powerful than the current 12-foot SPY-1 array with an antenna that is just two feet larger at 14 feet. The new radar also has much greater dynamic range compared to the SPY-1—particularly in areas with lots of interference from other emitters, jammers and clutter. The SPY-6 also has digital beam-forming capability, which enables rapid horizon-to-horizon surveillance of air targets while simultaneously devoting much more energy toward ballistic missile defense.

Huntington Ingalls Industries will start building the first Flight III Arleigh Burke-class destroyer—the future USS Jack H. Lucas—in fiscal year 2019. The new destroyers will form the core the of the Navy’s surface fleet until the service eventually develops a future surface combatant that will eventually replace both the Ticonderoga-class cruisers and the Arleigh Burke hull form.