America's Most Lethal Enemy: Itself? 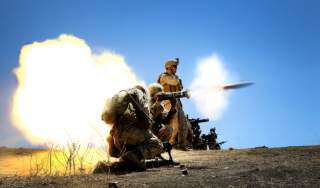 Recently on “Face the Nation,” CIA Director John Brennan made an unnoticed but significant acknowledgement about the conduct and consequences of U.S. foreign policy and the ongoing war on terrorism. Asked whether President Obama “seems to be just trying to buy time here, that he’s not ready to make a full commitment here in this war on terrorism and basically is just trying to keep things together well enough that he can leave it to the next president to resolve it. Do you see that?” Brennan responded:

“I don’t see anything like that. I’ve been involved in this administration in different capacities for the last six and a half years and there has been a full court effort to try to keep this country safe. Dealing with some of these problems in the Middle East, whether you’re talking about Iraq, Iran, Syria, Yemen, Libya, others, these are some of the most complex and complicated issues that I’ve seen in my thirty-five years, working on national security issues. So there are no easy solutions.

I think the president has tried to make sure that we’re able to push the envelope when we can to protect this country. But we have to recognize that sometimes our engagement and direct involvement will stimulate and spur additional threats to our national security interests.”

What makes this concluding sentence so extraordinary is that it is—to my knowledge—an unprecedented recognition by a senior official about how U.S. counterterrorism activities can increase direct threats to the United States and its “national security interests.”

As I wrote recently, senior U.S. intelligence and counterterrorism officials increasingly warn of the threat of “lone wolf” terrorist attacks within the United States, which are generally self-instigated and fueled by the narratives constantly promoted by foreign terrorist groups. Unfortunately, these observations by senior officials have had no impact on discussions about U.S. foreign policy conduct. Rather, Washington collectively avoids exploring the possibility that U.S. counterterrorism activities abroad might play a role in compelling U.S. residents to plot and attempt attacks at home.

Hopefully, Brennan’s unprecedented recognition is further explored and commented on by the White House, State Department, and Department of Defense. It would be particularly useful if journalists with routine access to officials and spokespersons pressed them on this point, asking which of their agency’s engagements have spurred threats to the United States. More immediately, the next public interview with the CIA director should begin by asking him which engagements and direct involvements he is referring to. This overdue observation of how foreign policy can harm U.S. national security leads to the critical, and rarely asked, question of which specific policies should be adjusted accordingly.