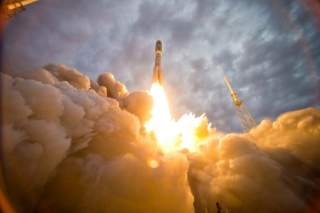 The Senate later this week will vote on whether to loosen proposed restrictions on the use of Russian RD-180 rocket engines.  This issue is not as complicated as some “experts” make it seem.  The bottom line is that if Russian engines are banned, taxpayer money will be wasted, national security will be impaired, and Vladimir Putin’s inner circle will be hurt not at all.  Here are the key details.

1. The Atlas rocket that our military uses for launching heavy payloads into high orbits is the cheapest option. SpaceX lacks the lift to orbit items like missile-warning satellites, and the only other option — Delta rockets — would cost at least 35% more than Atlas. But using Atlas requires an RD-180 engine from Russia for the first stage.

2. Using Delta when an Atlas will do is like burning $100 million on the back lawn for fun. That’s how big the price difference could be for some missions. If Delta gets grounded like SpaceX rockets were last year, and Russian engines can’t be used, then there will be no way of orbiting satellites critical to America’s defense.

3. The cost of buying RD-180 engines from Russia is around $100 million annually. If you think stopping their purchase will somehow hurt Russian leader Vladimir Putin, then you must not have seen the estimates that his personal fortune is worth tens of billions of dollars. The U.S. spends more money importing shellfish from Russia than rocket engines.

4. Everybody in Washington agrees that our military needs to stop depending on Russian engines to get into orbit. The Pentagon is funding several programs to develop American-built alternatives. But cutting off access to Russian engines before American-made engines are available is dangerous.  SpaceX cannot accomplish 40% of the planned military launches.

5. The Senate Armed Services Committee reported out a 2017 defense bill that bans Russian engines in the near future. Senators Gardiner and Nelson are offering an amendment that would allow continued use until the end of 2022 — which is when affordable American alternatives are expected to be ready for launching.

Without Russian engines, there is a danger U.S. warfighters will not be able to monitor what is happening in hostile countries — including whether they are launching nuclear missiles against the American homeland.  Lawmakers should never have allowed America’s security to become dependent on the availability of Russian engines, but that’s where we stand today.  The danger would be increased by banning Russian engines before viable alternatives become available.

This story originally appeared on the Lexington Institute’s LexNext blog