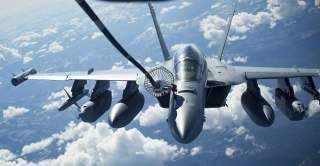 The United States Navy and Australia will work jointly on the new Raytheon AN/ALQ-249 Next Generation Jammer that is currently being developed for the Boeing EA-18G Growler airborne electronic attack aircraft. Both the U.S. Navy and the Royal Australian Air Force fly the Growler, which is a derivative of the Boeing F/A-18F Super Hornet strike fighter.

According to the U.S. Naval Air Systems Command (NAVAIR), the Airborne Electronic Attack Systems and EA-6B Program Office (PMA-234) and Royal Australian Air Force (RAAF) signed a memorandum of understanding (MOU) on Oct. 18 to jointly develop the AN/ALQ-249 Next Generation Jammer Mid-band (NGJ-MB) from here on in.

“This is a very important milestone for both nations,” Capt. Michael Orr, NAVAIR’s program manager for PMA-234 said in a statement. “PMA-234 is officially a joint program office partnering with one of our allies. It took four years of communication and collaboration to get to this point, and I commend both nations for their dedication to this partnership.”

According to NAVAIR, the new MOU “provides the framework for communication, coordination and cooperation between the U.S. Navy and the RAAF during the NGJ-MB engineering & manufacturing development (EMD) phase.” The NGJ Inc. 1 completed its critical design review earlier this year to enter into the EMD phase.

The new jammer—which uses Gallium Nitride-based active phased arrays—is many times more capable than the existing 40-year-old ALQ-99 pods. With its electronically scanning and ability to use novel jamming techniques, the open-architecture NGJ will be a formidable addition to the Growler’s arsenal. That’s especially true when the NGJ is combined with advanced data-links such as the Tactical Targeting Network Technologies (TTNT) that can move information many times faster than the current Link-16.  The Navy plans to incorporate the TTNT datalink onto the Growler in over the coming years.

The first NGJ increment is scheduled to become operational by 2021. But the Navy is already starting to look at follow-on increments that would deal with threats in the low and high bands. Increment 2, which is likely to be fielded in the late 2020s, will be designed to jam low-frequency early warning radars that can detect stealth aircraft. The third increment will be designed to engage high frequency fire-control band radars.

Together, the three versions of the NGJ pods will form a complete set of jammers—much like today’s ALQ-99—but with fewer, but much more capable pods. The NGJ program is a high priority for the fleet as advanced air defense like the Russian S-400 and the Chinese HQ-9 proliferate. Thus, the new jammer can’t be operational soon enough.