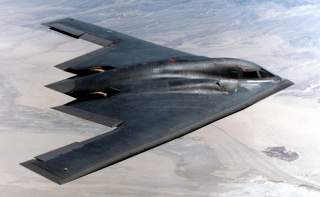 Last year I wrote a series for The Strategist on the US Air Forces’ (USAF) new bomber program. (Parts one, two and three.) I was skeptical of the possibility of producing a state-of-the-art long range bomber for anything like the proposed unit cost of US$550 million (2010 dollars). The historical trend (see part 2) suggested a significantly higher price. But I also observed that bomber costs ‘hit the wall’ with the B-2 and that new approaches are needed.

We haven’t learned much about the new bomber in the intervening 15 months. We know it will be the B-21 (‘21’ signifying the century rather than a sequential bomber designation). We don’t know much more about costs. But we got to see what it (allegedly) looks like.

It looks quite a bit like its billion dollar predecessor from Northrop Grumman, the B-2. That got me thinking whether the new bomber might be simply a smaller and more affordable B-2. For reasons explained below, that might be about right.

A strong driver of real cost growth in military systems is the sophistication of cutting edge systems needed to meet military requirements. We can be reasonably sure of that for two reasons. First, other machines like home computers, smart phones and automobiles have come down in real terms due to productivity improvements in manufacturing and economies of scale, despite substantial increases in performance. You can still pay a lot for a few extra percent of performance (Formula 1 cars had similar cost curves to military systems until they were specification capped), but most consumers settle happily for an 80% solution. Second, the history of American bombers shows us that unit prices fell below trend when numbers took precedence over that last little bit of performance during WW2. But costs rose well above the trend line when Cold War pressures drove very high specification levels. (The worst offender was the B-58 supersonic nuclear bomber—which cost three times as much as the slower, but larger and longer-ranged B-52.)

The chart here shows the cost per kilogram of American bombers since 1925. That’s useful because it’s a reasonable proxy for complexity and manufacturing sophistication. Against this metric, automobiles and phones have both tracked steeply downwards, while bombers have tracked relentlessly upwards. Interestingly, while the B-2 unit flyaway cost sat below the historical trend, when we factor in weight, it’s bang on the line.

Now look where the projected cost of a B-21 in 2025 sits. There have been reports that it’ll be smaller than the B-2 to save on production cost. I’ve taken a couple of representative empty weights for illustration. The B-2 is 71,700kg empty, so I used B-21 weights of 60,000 and 30,000 kg. More than 60,000 and you won’t save much; any lighter than 30,000 and you won’t get the required range, endurance and payload. So it’s probably somewhere between those bounds.

Even so, there’s still a factor of 10 or more between the projected B-21 cost/kg and the extrapolated historical trend. That means one of two things. Costs could escalate, and repeat the disastrous B-2 program that saw 21 aircraft delivered instead of 132. The USAF can’t afford to have that happen again; the B-52 won’t be around forever (despite appearances to the contrary) and the B-52 and the later B-1B aren’t survivable against modern defences.

The other possibility is more modest performance. Being smaller than the B-2 won’t itself save enough to make it affordable—to get onto the trend line it’d have to be a totally unrealistic 5,000 kg. But avoiding Augustine’s Laws by keeping it (relatively) simple, those last percentage points of desired capability won’t drive a disproportionate cost increase. (See the ‘sophistication de-escalation’ schematic in the graph.) And there are indications that the approach being taken is technologically conservative. Aviation Week last week quoted a USAF program executive (paywalled):

“[The B-21] leverages three decades of small-scale but persistent bomber work since delivery of the Northrop B-2 Spirit in the 1980s and ’90s, particularly advances in flying wing designs. The B-21 uses mostly mature, existing technologies…”