America's New Nuclear Missile Submarines Might Have a Problem 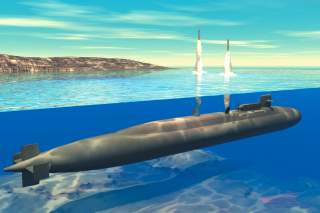 The Government Accountability Office is raising concerns about the technological maturity of the Columbia-class ballistic missile submarine.

The new boomer, which must become operational by 2031, will feature a host of new technologies that are supposed to increase the vessels’ survivability into the foreseeable future. However, as the GAO notes, many of those features are unproven and no prototypes have been built or tested.

“Additional development and testing are required to demonstrate the maturity of several Columbia class submarine technologies that are critical to performance, including the Integrated Power System, nuclear reactor, common missile compartment, and propulsor and related coordinated stern technologies,” the GAO report reads.

“As a result, it is unknown at this point whether they will work as expected, be delayed, or cost more than planned. Any unexpected delays could postpone the deployment of the lead submarine past the 2031 deadline.”

The GAO also accuses the Navy of misrepresenting the risks and the level of technological maturity of key components of the new submarine. Many of the boat’s systems such as the integrated power system—which uses a permanent magnet motor rather than gears to turn the drive shaft—have not been prototyped or tested under operationally representative conditions.

“The Navy underrepresented the program’s technology risks in its 2015 Technology Readiness Assessment (TRA) when it did not identify these technologies as critical,” the report reads.

The GAO report notes that the Navy is not required to provide the Congress with progress reports on Columbia’s development until 2020, but added reporting would help staffers get a better grip on the technological risks of this vital program.

“The Navy is not required to provide Congress with an update on the program’s progress, including its technology development efforts, until fiscal year 2020—when $8.7 billion for lead ship construction will have already been authorized,” the report reads.

“Periodic reporting on technology development efforts in the interim could provide decision makers assurances about the remaining technical risks as the Navy asks for increasing levels of funding.”

The GAO report was not entirely critical. The agency praised the Navy’s decision to complete most of the submarine’s design prior to starting construction but took aim at the service’s decision to begin design work before several crucial technologies have sufficiently matured.

“The Navy intends to complete much of the submarine’s overall design prior to starting construction to reduce the risk of cost and schedule growth,” the GAO notes.

“However, the Navy recently awarded a contract for detail design while critical technologies remain unproven—a practice not in line with best practices that has led to cost growth and schedule delays on other programs.”

Designing the submarine without fully understanding the end state of technologies such as the permanent magnet motor could lead to delays in building the new SSBNs.

“Proceeding into detail design and construction with immature technologies can lead to design instability and cause construction delays,” the report reads.

“The Navy plans to accelerate construction of the lead submarine to compensate for an aggressive schedule, which may lead to future delays if the technologies are not fully mature before construction starts, planned for 2021.”

Given that the Columbia-class is vital to maintaining the nation’s strategic nuclear deterrent, the prospect of delays and technological challenges on the new SSBNs is concerning. It is not clear how the service intends to address the GAO’s concerns, but in a letter to the agency, the Pentagon disagreed with the assessment—noting that reaching such a high technology readiness level is not practical for shipbuilding.

Time will tell if the GAO or the Pentagon is correct, but historically, the agency has proven to be right more often than not.