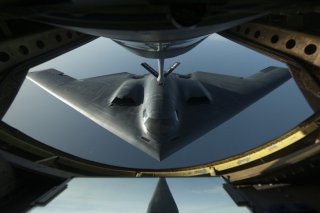 Several days ago, Northrop Grumman won the contract from the US Air Force to develop and build its new Long-Range Strike Bomber (LRS-B). For advocates of the big planes, the announcement came none too soon. The USAF’s bomber fleet today consists of 158 aircraft, with an average age of 39 years. To remedy both age and quantity, the USAF wants to procure a fleet of 80 to 100 LRS-Bs to replace its B-1Bs, B-52Hs, and perhaps eventually its B-2As as well.

Beyond some broad parameters concerning financial goals, little is known about these future bombers, and that creates two clear problems. First, secrecy can bring great military value, but also its own ill-understood costs. Second, obscuring details also naturally complicates analysis, leaving many to wonder whether to support or oppose what they don't understand. By probing the known unknowns of the LRS-B, we will try.

Some details of the LRS-B program have by now been well-publicized. The projected costs over the next ten years have been estimated—by two independent teams—at $23.5 billion in development, and $564 million per initial production aircraft. The latter is well under the inflation-adjusted cost cap of about $619 million (in FY 2016 terms) set in 2010 by then-Defense Secretary Robert Gates. An eighty-person team in the Air Force’s Rapid Capabilities Office is managing the entire project, with a greatly streamlined process. The electronic architecture will be open, as already demonstrated on the B-2A, so that add-on capabilities will be easier to incorporate in the future should it be deemed necessary. Two or three test aircraft will be built first, followed by five low-rate production lots comprising another 21 aircraft. Around 2025, the first squadron of LRS-Bs will fly as part of Global Strike Command, the USAF’s consolidated home for all bombers.

There has been some sound speculation as well. The new plane won’t be just a “bomber,” according to retired Lieutenant General David Deptula, but a “long-range sensor-shooter,” in an indication of a much wider range of potential capabilities. John Stillion of the CSBA has suggested even an air-to-air role. Presumably, each plane will be a versatile flying wing-body, with a two-person crew, numerous bombs, high subsonic speed, high survivability, and no gold-plating. If the aircraft performs as well as hoped, the shift in American attention to the long distances of the Pacific theater may set up “an inevitable competition” for money between LRS-B and F-35 Joint Strike Fighter (JSF) over the next decade.

But apart from this general public knowledge, “few things appear to be cast in stone,” wrote Franz-Stefan Gady, associate editor with The Diplomat. Aaron Mehta of Defense News called the airplane "stealthy, literally and figuratively,” adding elsewhere that “the US Air Force's single biggest research program is also its most mysterious.” Almost all details of the program have been kept tightly under wraps: even the dollar amount of Northrop’s winning bid—normally public knowledge in public procurements—is being withheld. The secrecy may be understandable. At the press conference announcing the contract award, Assistant Secretary Bill LaPlante explained that “you can always argue it’s too classified or not classified enough, but the simple idea behind the classification of the program is we need to preserve, as long as we can, the advantage of what we’re doing, so that adversaries can’t already be trying to build defenses against it.”

Indeed, as our colleague August Cole suggests to us, we can indeed easily argue about secrecy, for we know little about the real value—and cost—of our assumptions about secrecy. Classification may improve the American advantage in relative innovation, but only so long as the Chinese don’t once again steal the source codes. Classification, however, does nothing for the absolute progress of innovation, and hinders spillover into commercial endeavors. Eventually, secrecy can also hinder competition, for highly classified programs at best create walled gardens of a few cleared subcontractors from whom to choose. Then, in a second-order effect, industrial structure can be profoundly negatively affected, as those not read-in seek other markets, with fewer barriers—and perhaps higher margins to boot. Over the long run, too much secrecy chases away at least some of the best talent: national security is a compelling call, but there are lines of work with greater public glory and fewer administrative headaches. Just marketing such an obscured program is challenging too—and this may be why the LRS-B seems backed by more momentum than enthusiasm from professionals across industry and government.

The unknowns surrounding this project remind us of more unaddressed issues to ponder as development moves forward. Here we might borrow a paraphrasing of Sir Winston Churchill’s view on Soviet conduct in international affairs. We cannot today forecast the true value of the new bomber. It is a riddle, wrapped in a mystery, inside an enigma; but perhaps we can find some analytical keys in national interest, military strategy, and service politics. Evaluating the program is thus an exercise in probing the known unknowns. If only because the LRS-B is the biggest military program to get underway since the JSF in 2002, policymakers need to be asking what the LRS-B can be and should be. To help them as they decide whether to lend their support to the program, we will propose eight for consideration, and cover these in this column over the next two weeks.

James Hasík is a senior fellow and Rachel Rizzo is a researcher in the Brent Scowcroft Center on International Security, where this piece first appeared.