America's Next Sub Will Use Lethal Robots to Hunt Its Enemies 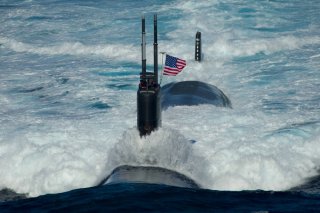 The United States Navy’s future replacement for the Virginia-class attack submarine could be far stealthier than today’s boats thanks to advances in propulsion technology. Moreover, those new submarines will be able control multiple unmanned underwater vehicles (UUV)—allowing a single next-generation attack boats to cover vast swaths of the ocean by itself.

While the Navy won’t start buying the new SSN(X) until 2034—and the new boat won’t become operational until 2044—the service has already started initial concept developments for the new submarine. One of the Navy’s major focus areas is propulsion, which is critical for ensuring that the new submarine is as quiet possible to defeat evermore-capable sonar.

Though the Navy could adopt a new permanent magnet motor for the SSN(X) similar to the one that will eventually be installed onboard the future Ohio Replacement Program (ORP) ballistic missile submarines, the service is considering more radical technologies. Though a permanent magnet motor dispenses with noise-generating reduction gears and other mechanical parts that are necessary to transmit power from a nuclear submarine’s steam turbines to the propeller, there might be as of yet unexplored technologies that can ensure that the SSN(X) remains stealth for the duration of its service life.

“I’m not just talking about the propeller or propulsor, it’s the whole propulsion system from power generation to motion through the water,” Rear Adm. Michael Jabaley, the Navy’s program executive officer for submarines told the U.S. Naval Institute News on March 3. “How am I going to get beyond the limitations of a rotating set of blades and the unavoidable noise that I just can’t get below? At this point there are no bounds on what I want people to be thinking about.”

While a revolutionary breakthrough in propulsion technology would certainly help to ensure America’s undersea fleet remains stealthy, the Navy is also working on developing new offensive capabilities. One of those capabilities would be the ability to deploy and control multiple UUVs simultaneously. “The SSN(X) has to have UUVs as a key part of expanding its reach so the affected domain of that submarine grows from just the immediate area that its sensors interact with to something much, much larger,” Jabaley told USNI News. “This new submarine is going to have to lock into a system that allows its impact to be felt in a much much greater sphere than we have now.”

The SSN(X) and its envisioned capabilities are little more than PowerPoint presentation right now. The Navy will need to make breakthroughs in command and control, communication, data relay and energy to turn Jabaley’s vision into a reality. But the Navy’s will have an opportunity to develop many of the SSN(X)’s technologies incrementally on future variants of the Virginia-class attack submarine. The Navy could start to introduce advanced UUVs into the fleet onboard the Block VI and VII Virginia-class boats—which are still on the drawing board—Jabaley said. However, the exact configuration of those Blocks has yet to be defined.

While the Navy is focusing on stealth in terms of noise reduction—recent developments in anti-submarine warfare have not been lost on the service. “There’s been a lot of discussion about the future of submarines and the future of stealth and the future of anti-submarine warfare—and we take all of that into account and still firmly believe there’s a significant role for the submarine in the United States Navy well into the heart of this century and beyond,” Jabaley told USNI News. “Now, that said, there are a lot of things that are happening that require some fundamental changes to what we consider an attack submarine to be. And some of it we’re already doing.”