America's Nuclear Arsenal is Back 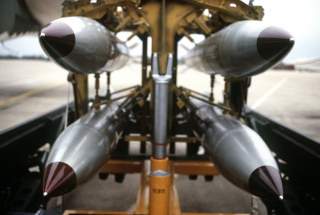 Given the intensity of media focus on a series of crises this year—Iraq, Syria, Ukraine, Ebola, and the South China Sea to name just a few—readers may be forgiven for having failed to notice that another important, though more incremental, development has also occurred. With each passing month it becomes clearer that a mood of nuclear realism is unfolding in US strategic policy. While President Obama is still remembered most clearly in the public mind for the anti-nuclear language in his Prague speech of 2009, a string of events in 2013–14 suggest that a shift of emphasis is occurring in relation to nuclear weapons.

First, the administration has committed to the long-overdue modernization of the US nuclear arsenal. True, the initial funding decisions are merely the opening salvoes of a program that will take decades to unpack, and key decisions about the shape and size of the arsenal remain unresolved. But the administration has signaled a commitment to renovate the strategic triad, and even to modernize its principal tactical weapon, the B-61 bomb.

Second, Washington has been busy putting its nuclear “house” in order. By January of this year, almost 20% of US Air Force officers in its nuclear weapons corps had been implicated in a proficiency-assessment cheating scandal. The Navy wasn’t immune either—earlier this month it expelled 34 sailors caught up in the nuclear cheating scandal. A senior naval officer was dismissed in October last year for inappropriate behavior in Moscow. Some might even see the sacking of James Doyle by Los Alamos National Laboratory as part of that pattern. Certainly a more restrictive approach to nuclear information management and a more disciplined approach to command and control of the arsenal seem to be the flavor of the day.

Third, evidence points to a determination to rebuild the intellectual capital necessary to sustain the nuclear mission for another generation. A senior State Department official, at the Annual Deterrence Symposium in mid-August, spoke of the need to recruit a new wave of “political scientists, lawyers, physicists, geologists, engineers, and more,” in order to “bring the next generation into the nuclear deterrence enterprise.”

Fourth, what we might call the “three musketeers” (Brent Scowcroft, Stephen Hadley and Franklin Miller) seem to have displaced—at least temporarily—the “four horsemen” (George Shultz, Henry Kissinger, William Perry and Sam Nunn), as the media commentators of the day. The four horsemen have published a range of important op-eds since 2007 about the need to move away from nuclear weapons (see, for example, here, here, and here). Their arguments have generally gone unanswered. The musketeers’ recent article in the Washington Post, underlining the importance of forward-deployed nuclear weapons in Europe, was obviously written with one eye on the approaching NATO summit in Wales. But it has wider implications: after all, if forward-deployed nuclear weapons are so important in Europe, why aren’t they just as important in other theatres?

Fifth, the administration seems to have wound back slightly the significance it attaches to the imperative of “nuclear security”—a protracted exercise to round up insecure warheads and quantities of fissile material in the world. Clearly that mission’s still important: Washington continues to fund it during straitened budgetary times. But one gets the sense that, for the coming few years, rounding up stray quantities of fissile material is not as strategically important as resuscitating the US nuclear weapons arsenal.

And sixth, the administration seems to have gone back to taking seriously the nuclear policies of the other nuclear-weapon states: witness the State Department’s recent finding that Russia is in violation of the Intermediate-range Nuclear Forces (INF) Treaty.

Now, some will argue that those are all just straws in the wind, and that if Obama wanted to shift his nuclear policy, he would just say so. But one year out from another NPT Review Conference, could he? Besides, has policy changed, or are we just seeing a shift of emphasis? In 2009 Obama said he thought a non-nuclear world would be safer and the US should work towards that goal. The goal, he said, might not be reached in his lifetime. And in the meantime, the US would need to ensure it could rely upon a safe, secure and effective nuclear arsenal. So a theme of continued reliance always sat side by side with the grander goal of nuclear disarmament.

I think the straws tell a story: that nuclear weapons are making a comeback in US strategic policy—driven by a growing mood of strategic realism in Washington. The strategic environment of 2014 looks different to that of 2009. True, the comeback will probably be limited. But when future historians look back on 2013–14, they’re likely to paint it as a turning of the tide on nuclear weapons policy, occurring—ironically—under the administration of one Barack Obama.